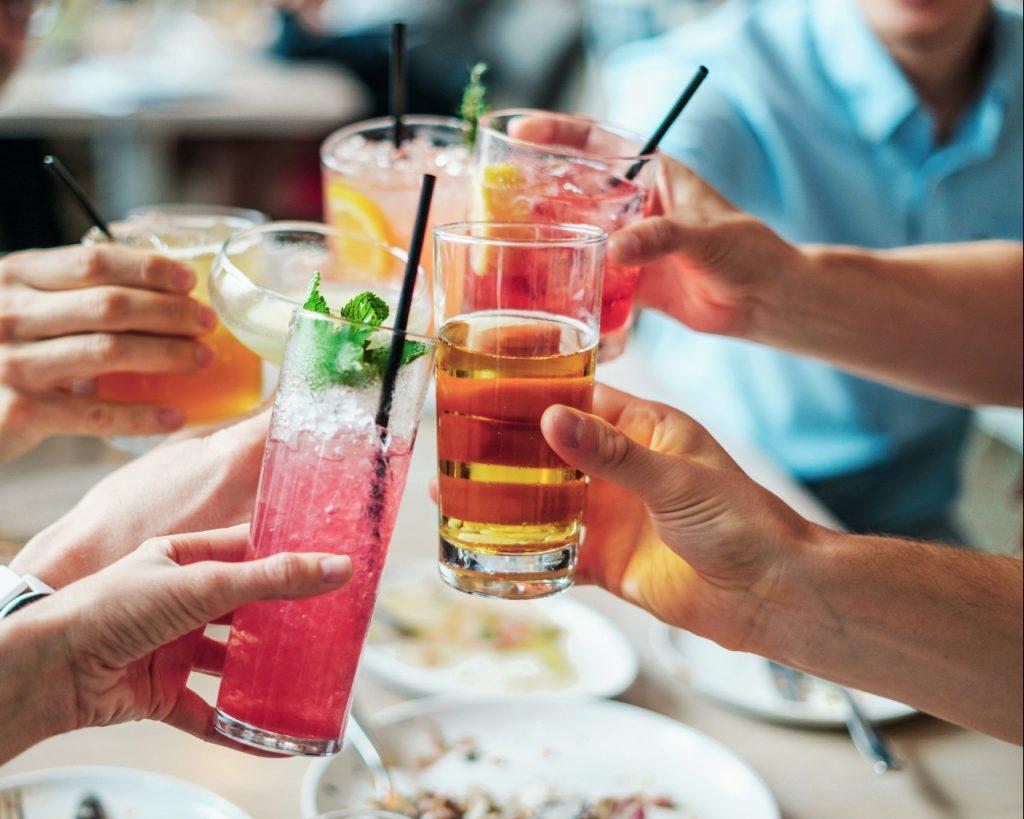 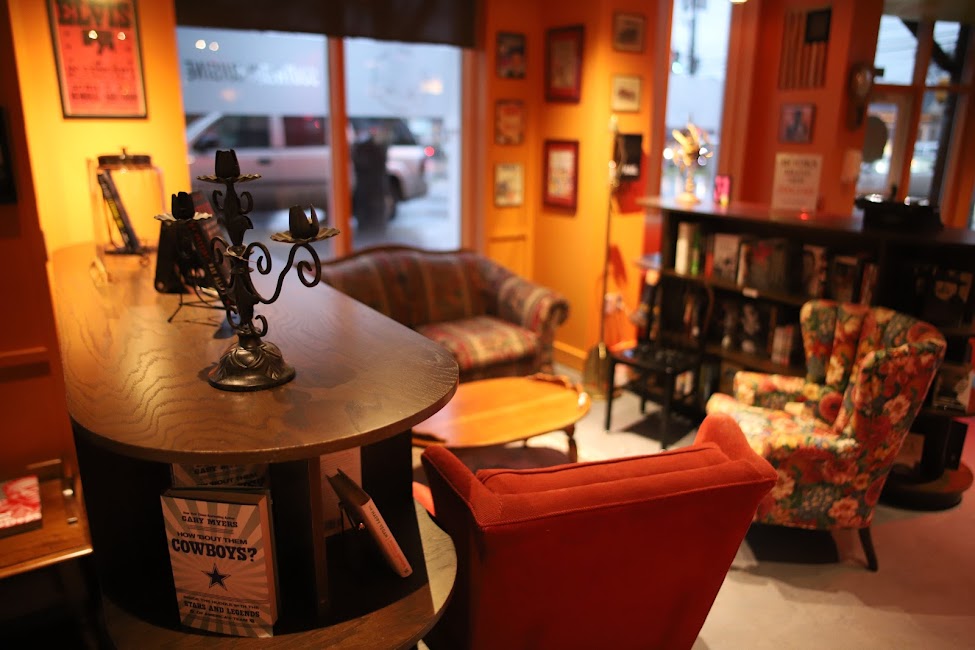 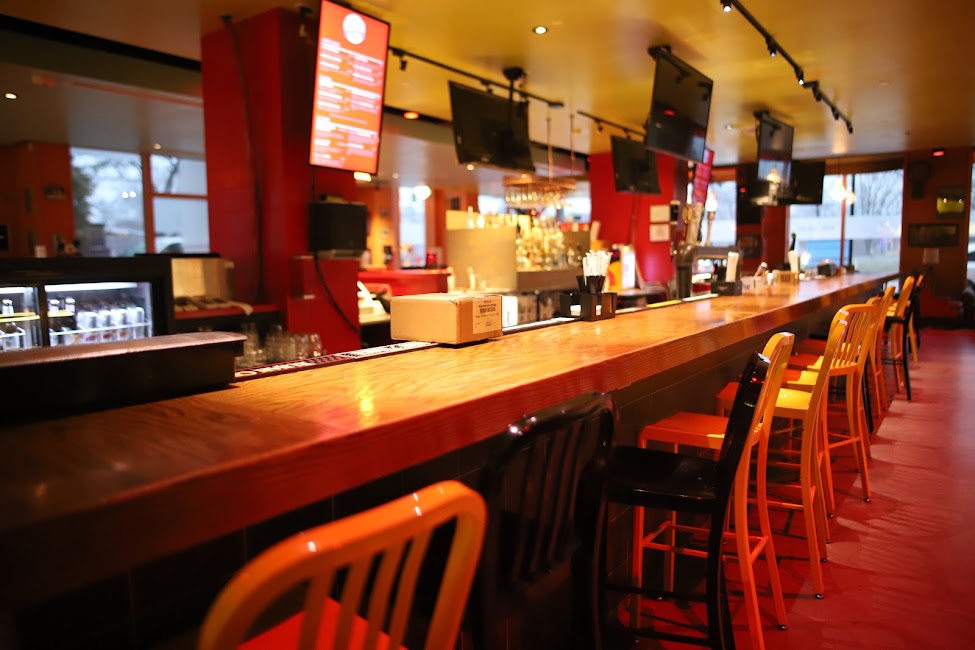 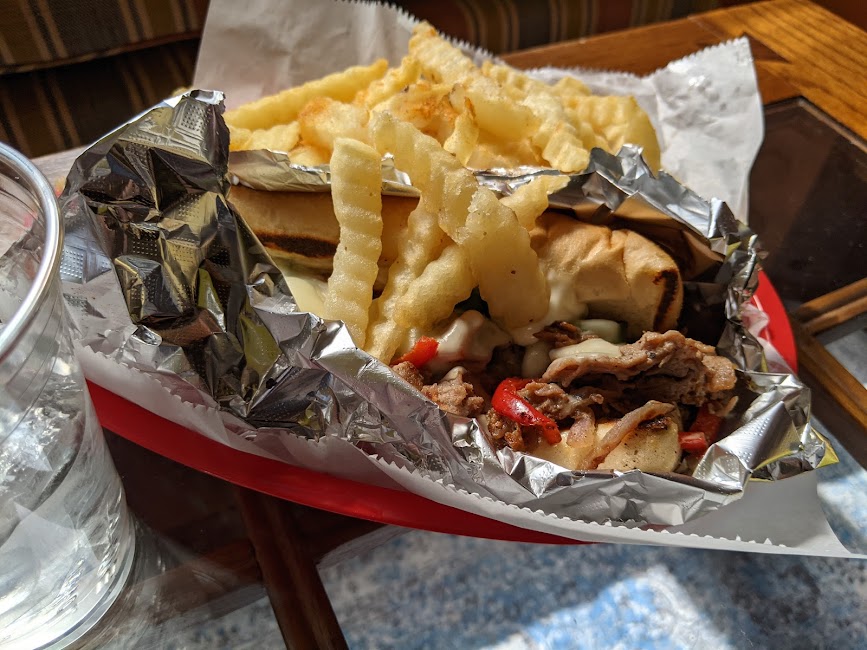 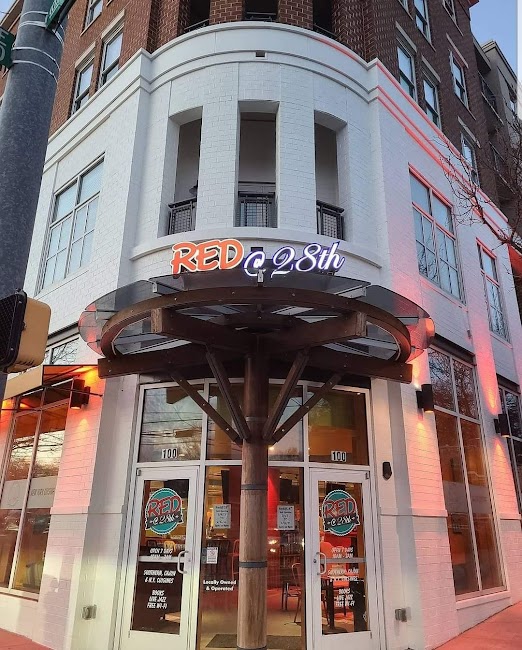 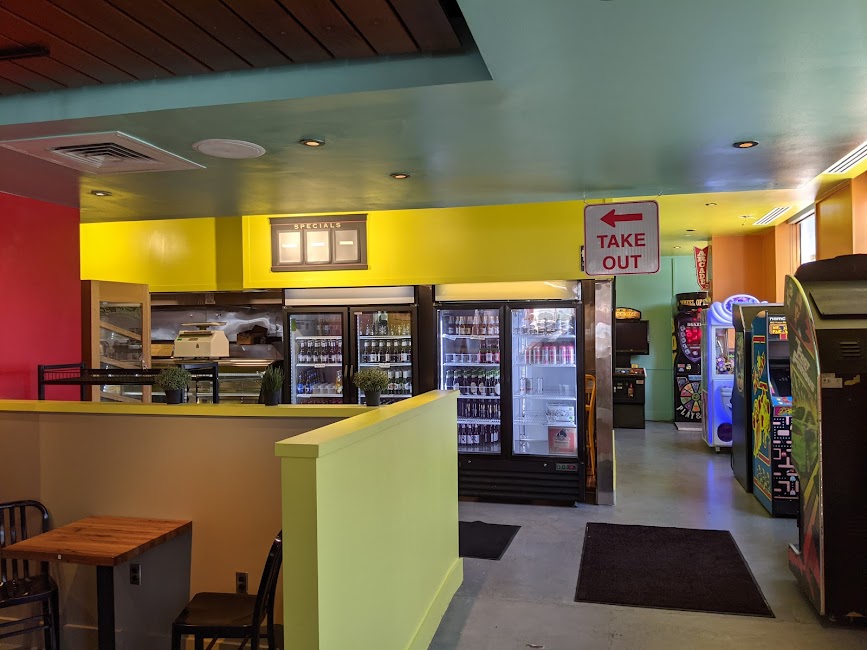 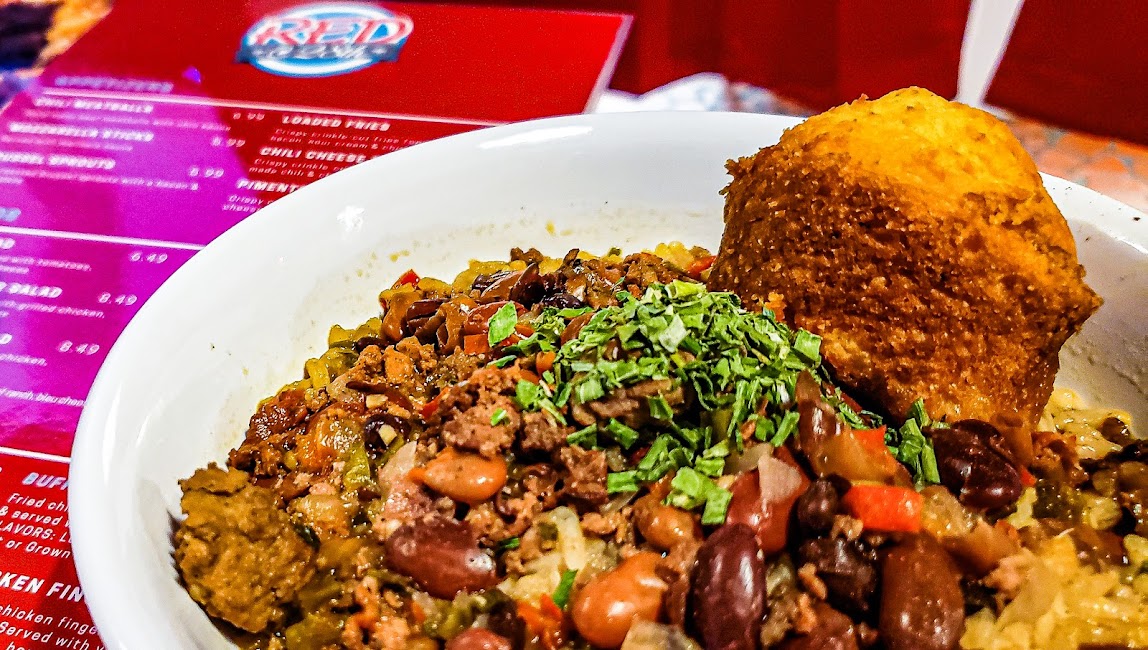 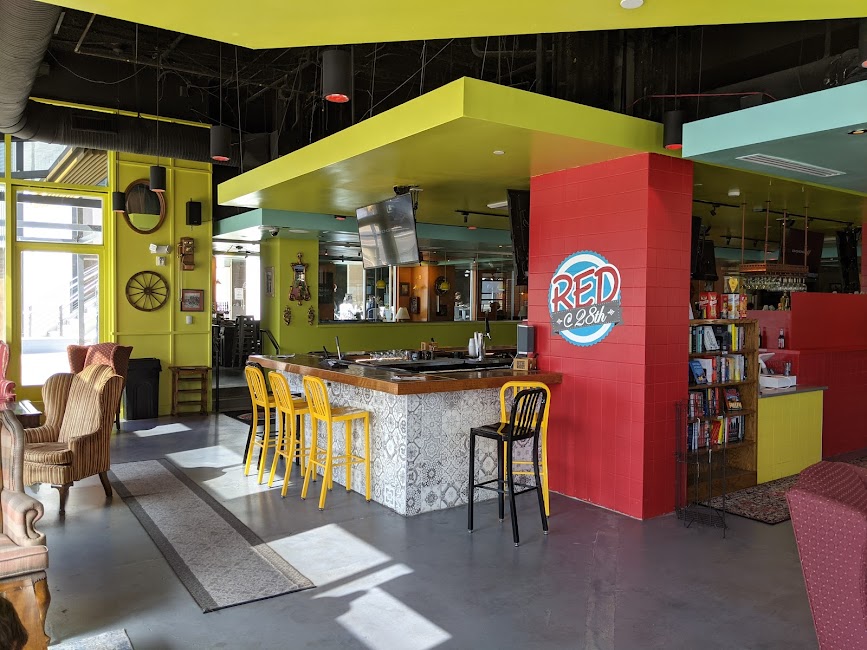 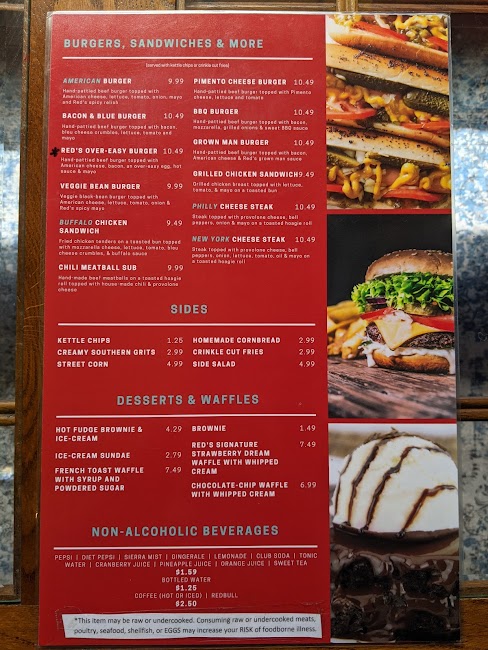 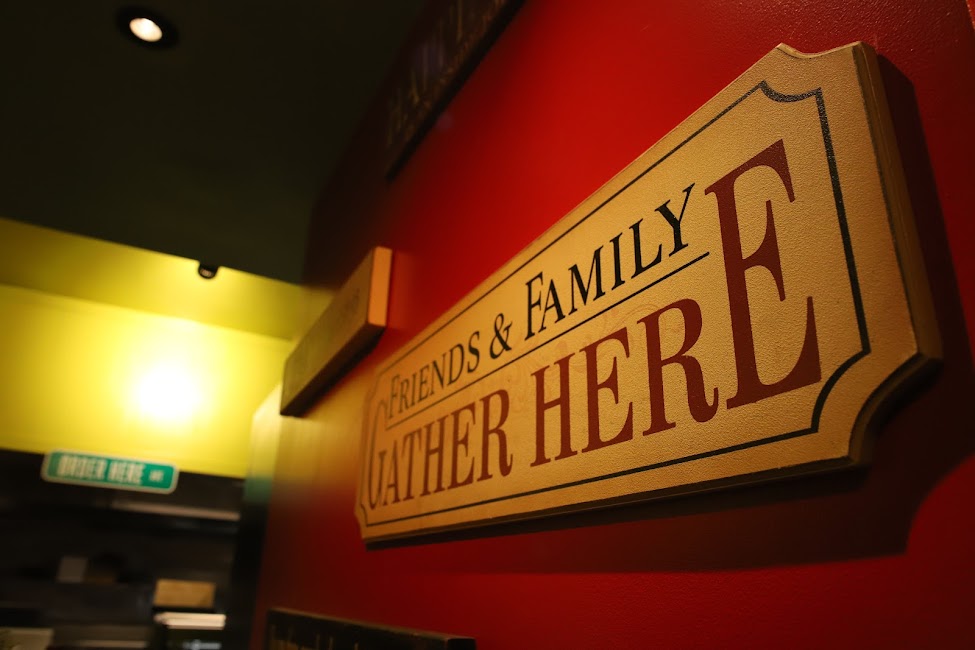 This was the starting place for a bar crawl event we attended. The vibe was nice. If you're familiar with a place called "Busboy & Poet" in DC/MD it gives off that same environment with a hookah lounge option. Didnt stay long but from what we experience, it gives real chill/kickback.

Release Therapy with A Poet Named Superman was awesome. My friend missed a flight and we ended up coming out to enjoy the time together! Everyone was dope. The customer service was straight. Folks were enjoying the poetry, music and fun... the hookah was bearable (I don't smoke) and the vibes were 100!!! Definitely enjoyed myself so did my ppl.

I came on a Sunday for Brunch. They had a $6 brunch menu with generous portions. I had the omelette which was good. My friend had the chicken and waffles which looked good as well. And they had a $3 Cabernet special. The music was good a mix between hip hop and rnb. The staff was super friendly and helpful. Nice chill atmosphere. Definitely coming back. Good bang for your buck.

Respectable food, eclectic atmosphere, and nice staff. Upon entering, the first thing you'll notice is a lounge area filled with a multitude of books to read and purchase (if desired). Across from that is the bar area that is in the same place as it was when operated by People's Market (previous venue). At the bar area it appears you can order drinks along with hookah items, though we went for lunch so we didn't try either of these options so I can't speak to them. When walking towards the back of the restaurant, they have a blast from the past with some old school retro video games and some sweet video game paraphernalia on the walls (see images attached). They also appears to have kept the same area that People's Market had in the back when ordering food, but note that this is only where food comes out and is not where you would go to order food like it was with People's Market. Instead, you can sit down at a table and be served individually by the wait staff. The staff was friendly, helpful, and attentive, but I can't really speak to how they would have been when busy since we went right after it opened so we were one of the few in the restaurant at the time. The food is standard american food with some different options from the standard (like both a Philly Cheesesteak and a NY Cheesesteak). I ordered the Philly Cheesesteak while my colleagues ordered the grilled chicken sandwich and the chicken tenders. All the food was what you'd expect it to be and of decent quality. It wasn't necessarily what you'd get in Philly as a Philly Cheesesteak, but I only expect that from a few Charlotte based restaurants so I wasn't expecting that (especially since my dad's family is from Philly so I am rather particular in a quality Philly Cheesesteak). That said, the meat was juicy and well seasoned. The cheese and veggies were also well done with the correct combination of cheese to veggies (for a standard Cheesesteak), and the quality of ingredients and seasoning overall was respectable. My colleagues both started their food was what was expected, nothing more, but nothing less from a chicken tenders and as grilled chicken sandwich. The fries aren't my favorite, simply because crinkle cut fries aren't my preference since I prefer a thinner, crispier fry, but the seasoning of the fries was well done. The left side of the restaurant had a completely separate area separated by glass (which used to be fully open when owned by People's Market), but they did a good job of updating it and making it appear comfortable. We decided to eat on a retro couch in the front of the restaurant by the windows, which I found to be rather nice and unique, similar to the eclectic seating at an Amelie's Bakery. The hookah bar is not really my thing, but I'm sure for others is a great option. The alcoholic beverages also appear to be popular but again, being that it was lunch, I unfortunately can't share any opinions about either. That said, if you want a unique experience with live music (at night supposedly), or a live poetry reading, while smoking some hookah, getting some drinks and eating some decent food, then this would be a place worth considering.

This place gets one star because the decor is super cute and the front door girl was super sweet! Otherwise than that the drinks are terrible the service was the top worst experience at an establishment. Not only is there NO seating organization, the servers take really long, the drinks take even longer and guess what, an hour after we ordered our hookah it never came out and we never saw the server again until we got aggravated and wanted to pay the bill. The only good thing that came out of this is we found the BEST SPOT for hookah and a good vibe at CRAVE 10 mins away. Thank you for helping us find a gem bc this aint it! #hotGARBAJ 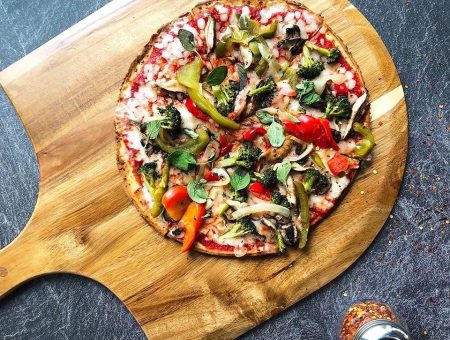 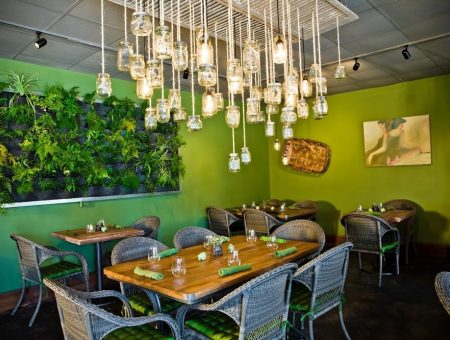 Fern, Flavors from the Garden
Restaurants 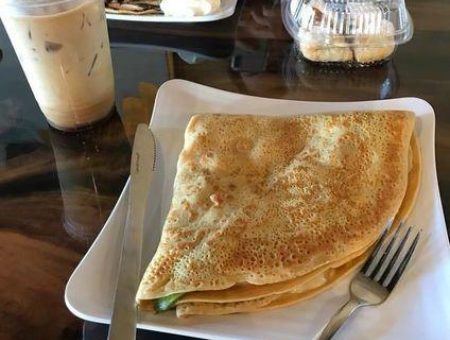 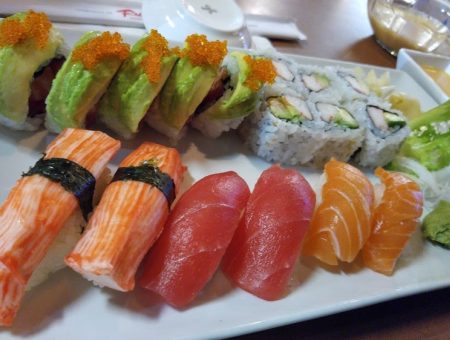