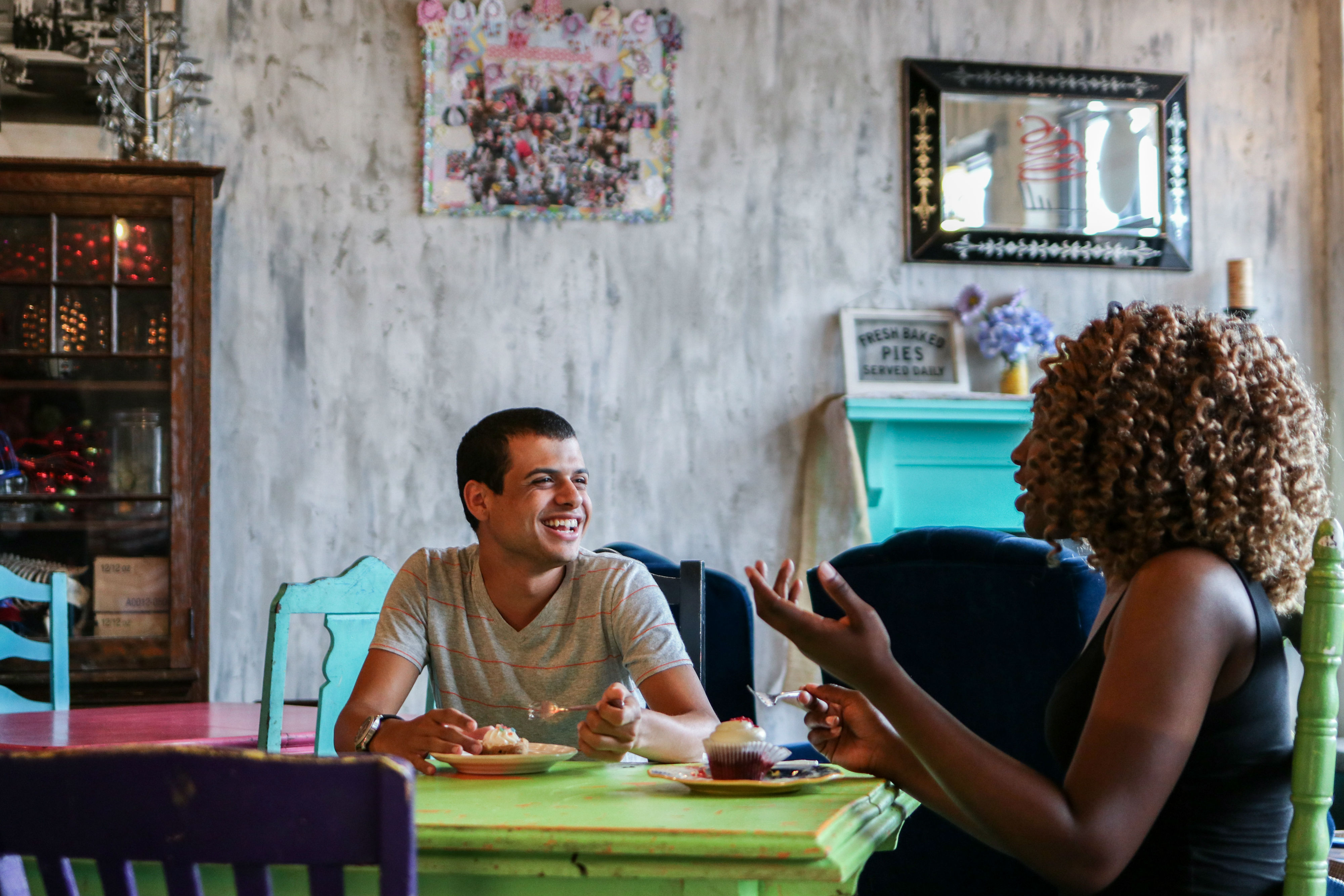 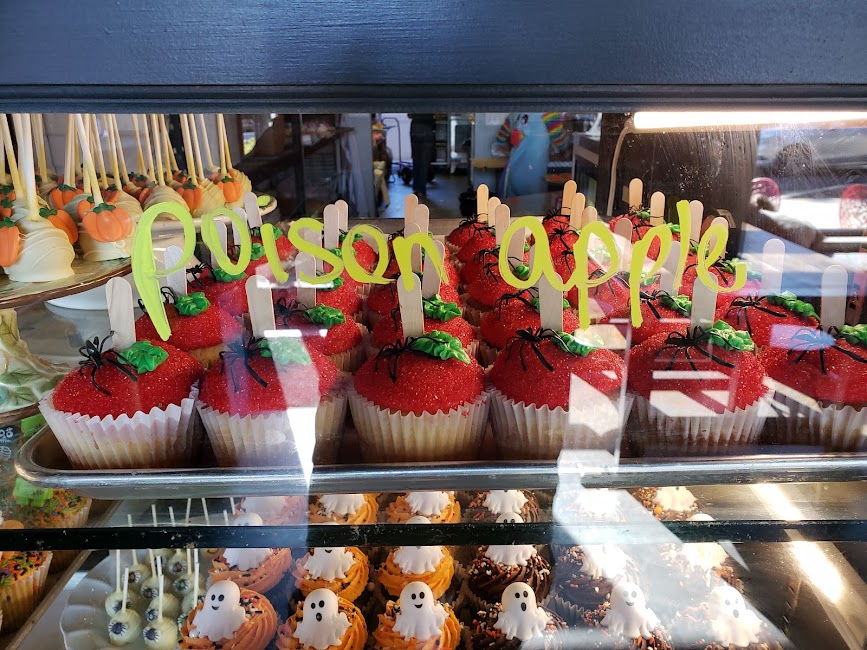 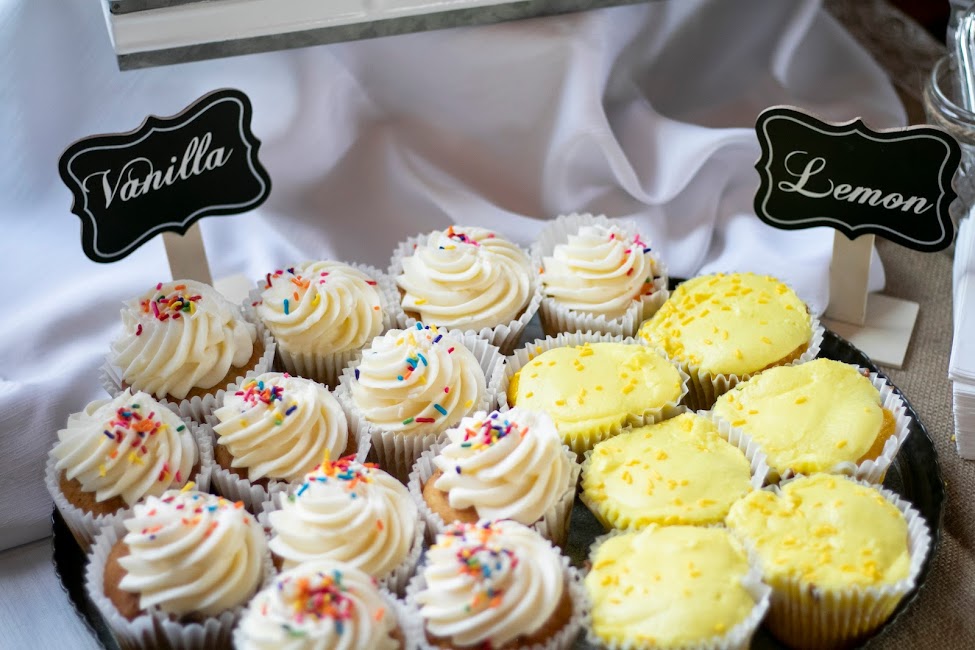 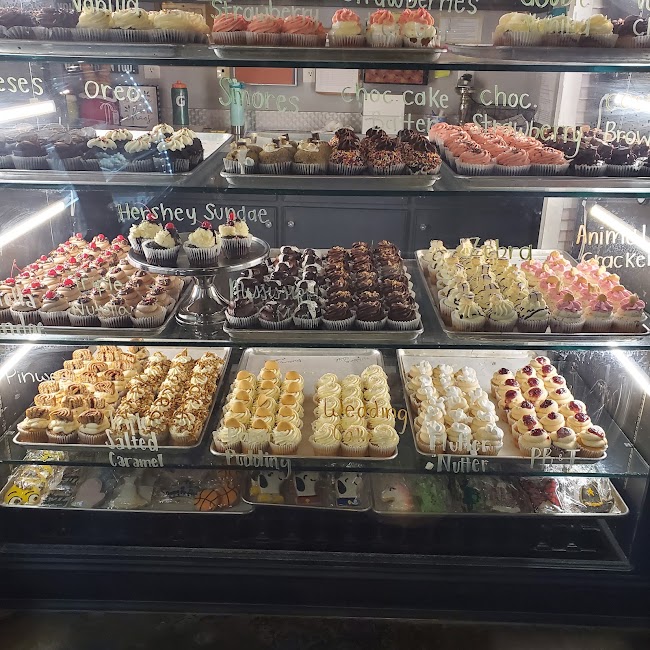 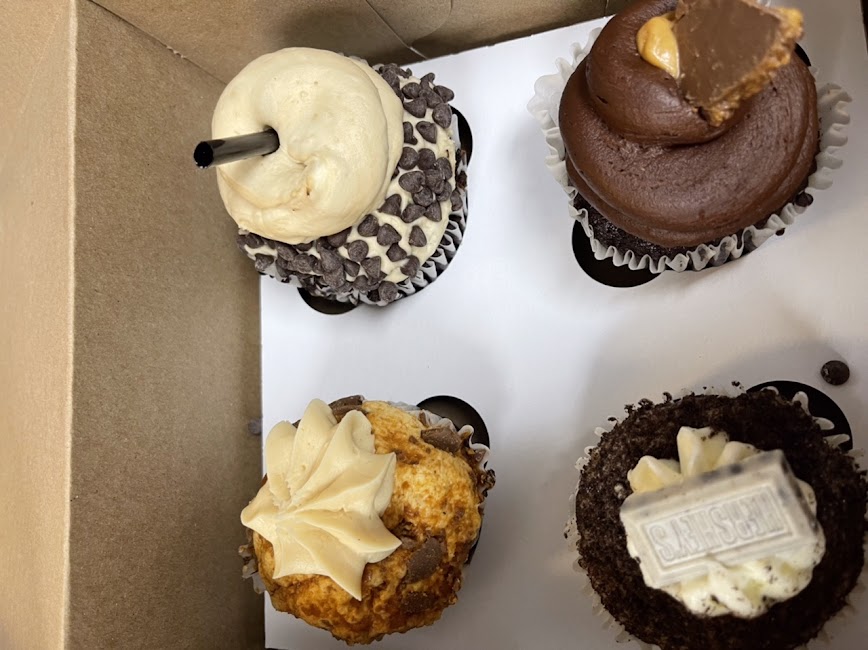 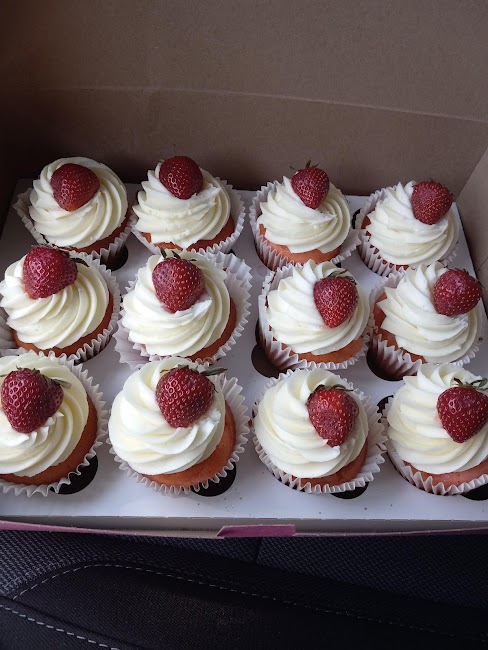 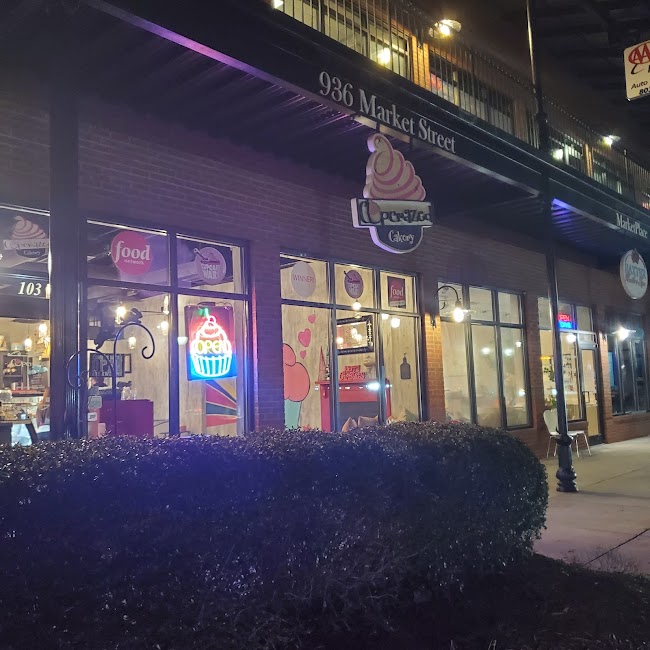 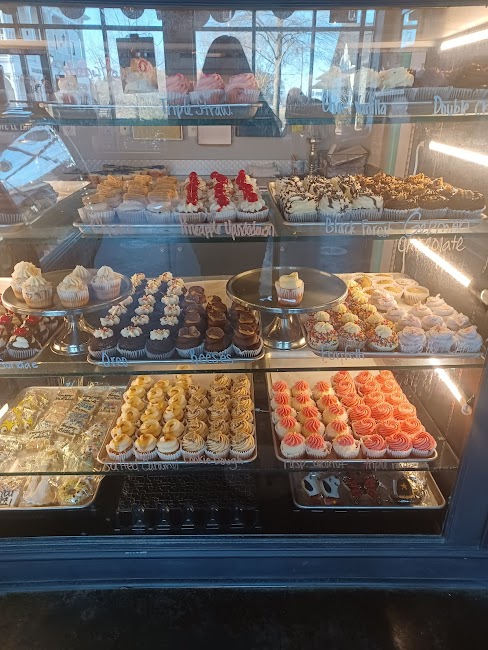 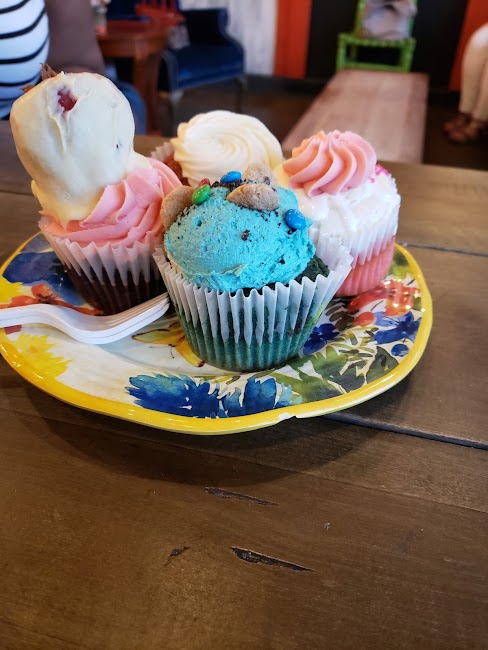 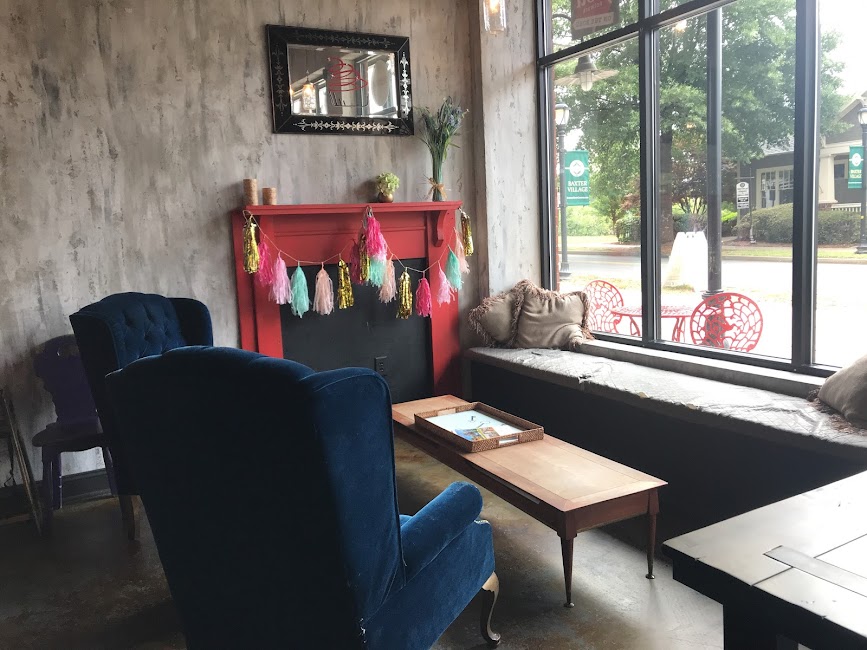 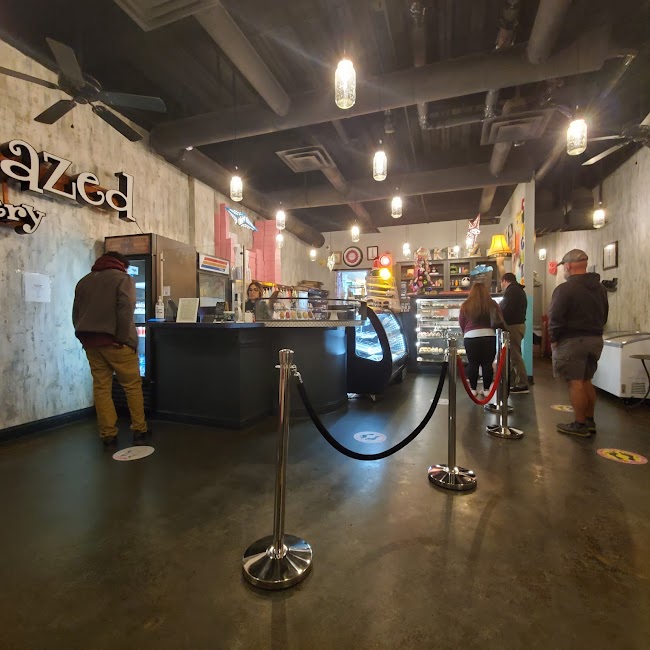 Such a sweet (quite literally) shop! My friend and I stopped in to share a tasty treat, and had trouble narrowing down our choices (there are so many flavors!). But we were beyond thrilled with our apple crumble cupcake. It wasn't cloyingly sweet like many ready-made cupcakes, and we were delighted to find huge chunks of apples in the cake.

Not happy! I took a picture of the exact cupcake I taste tested to show them what I wanted. What I got was something completely different. This was a waste of time and money! The preservation was lacking. This was for an important client. The strawberries and wrapping left alot to be desired. Will NOT return! In response to owner, the liner was not the only issue. The strawberries were not the best quality. They were small, bruised and appeared to be going bad unlike the one I came in to taste test. Again I will not return. I appreciate your willingness to improve. A better response would be to offer at least a 50% refund, a sincere apology or fix the issue upon pick up. What you gave me is not what it wanted nor did it look like the picture I presented. I specifically said this is what I want when I presented the picture! My work requires that I spend alot of money at bakeries. I'll take my business elsewhere. See pictures below. The beautiful cupcake with the healthy strawberry is the actually one I taste tested. The bruises are visible on the other ones. They were like this upon pick up. Almost $40 for this!! No thank you!

I had called on 5/18 asking if they could accommodate a graduation cake for 5/28. They asked me to send over picture ideas and details that I wanted incorporated into the cake. I did as requested and was called back. The bakery said they could accommodate me and asked what time I would need it. I told them as soon as they opened that morning. I paid for the cake in full as this was the only way they would process my order. I sent my husband over on 5/28 first thing in the morning and the cake was still not finished. Roughly 30 minutes later he was able to get the cake and leave. He brought it home and honestly I couldnt believe he even left the bakery with the cake. Im surprised they allowed a customer to take it. The image I sent to them had a small fondant graduation cap on the cake(not the supersized one they put on it). I also asked that the year be put somewhere on the cap. That also was not done. Lastly with the fondant.it was obviously refrigerated and then pulled out. When fondant is chilled and then put back at room temperature it becomes shiny, sticky, and wilts like in the picture above. Not recommended. As well as that fiasco the cake drip was sloppy and uneven as well and dripped onto the Nation Ford image. I also asked that Congratulations (name) be written on the cake board somewhere. This was also not done. Lastly and certainly not least, the cake itself. The edges of the cake were rock solid and the inside was so soft it fell apart while serving. My guests were even commenting on it. I did call the bakery and expressed my unhappiness and they wanted me to bring the cake back and pick it up later or have it delivered later I explained this was not an option as we had no time to go back and wouldnt be home until after they closed. I was then told the manager would contact me regarding an alternate resolution. I have not heard back from them. I would not recommend them for cakes at all.

I literally love this place so much. But today I went to go get cookies because it was 1 dollar Thursday and I arrived and ordered a couple cookies. Paid for them and everything I looked in the bag and they where completely burnt. When we bit into them they where hard as a rock and just crumbled into pieces. I have gotten cookies from her multiple times and never had a problem. I just dont understand why they would bag up and sell us completely uneditable cookies.

I paid a lot of money for this paw patrol cakeand it came out awful!!!! The fondant was bubbling in sections, cracked all over, and was just poorly executed. To top it off, the cake layers werent level so the top of the cake was on a slant. The over detail was wrong and the collar around the cake wasnt even straight all the way around. When I called to ask what happened, they told me that they had a lot of orders and only 1 person decorating so the cakes didnt get 100% of their attentionwhich is wildly unprofessional! It should be quality > quantity and they should set expectations if theyre too busy. The person I spoke to even offered to give me the owners number which seems odd so I gave her my number and told her to talk to the owner and have them call me- which I never heard from. I must say- the cake tasted amazing! They should stick with cupcakesIve never had a bad experience with their cupcakes!! They are just not experienced enough for custom cakes. update: My husband posted pictures of the cake on social media and messaged them to explain the situation. They replied back saying that theyre human and make mistakes (which is true) but another unprofessional excuse. They are selling a good so they should have honesty re-did the lopsided cake. I would be embarrassed and mortified if that cake left my kitchen, let alone a bakery. They gave us a credit to the bakery and then hid our pictures of the hideous cake that they provided us as if that made things better. Dont be fooled by the gorgeous cakes that they post on social media- theyre only posting picture quality cakeswho knows how many cakes they dont post that looks like ours! 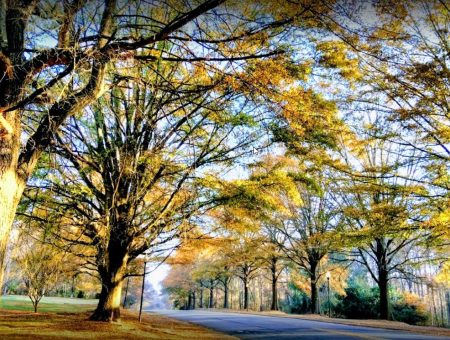 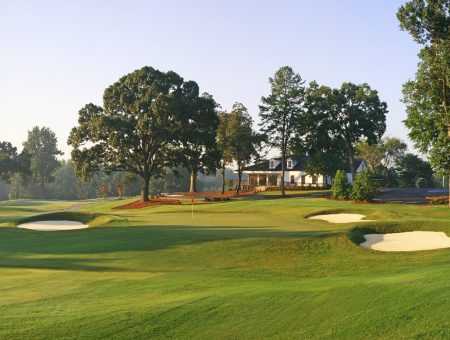 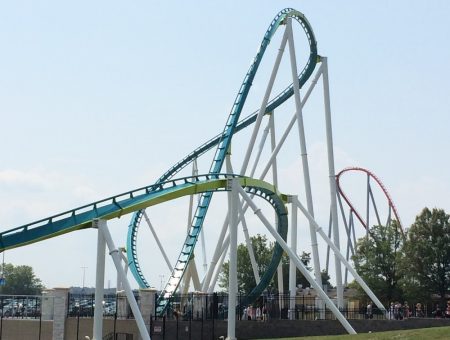 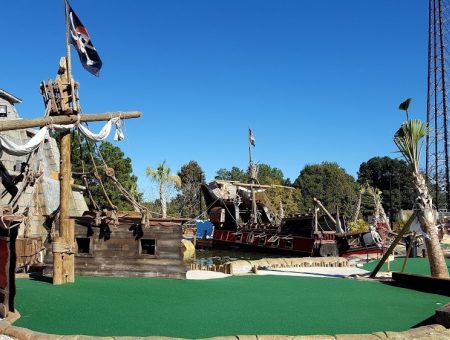