15+ Black Movers & Shakers Who Have Touched Our City

The Queen City is teeming with exceptional Black talent and game changers.

From game-changing creatives to trailblazing leaders, here's a look at 15+ notable Black Charlotteans who have made (and continue to make) an indelible mark in the city.

Disclaimer: This list is by no means exhaustive and in no particular order. We believe the contributions of Black Charlotteans are innumerable, and we know some very important people are missing from this rundown. This is simply a quick look at some people who are part of transforming our city for the better.

An Illinois native turned Charlotte transplant, Alvin C. Jacobs Jr. is a photographer and image activist who travels the country documenting social justice movements. His work has brought attention to the plights and triumphs of marginalized people all over the nation, including in Charlotte, where his “Welcome to Brookhill” exhibit spotlighted neighbors facing displacement from their housing complex. 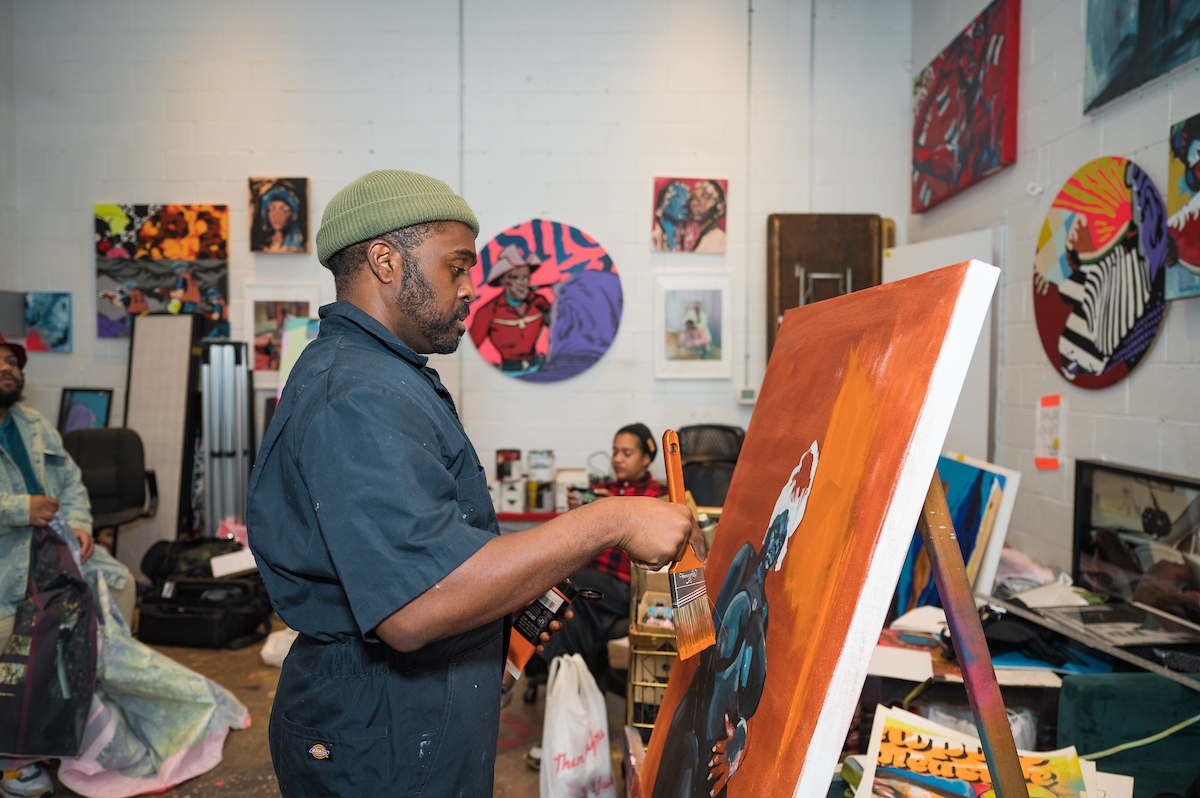 This prolific painter and innovator is an artistic virtuoso and champion of Charlotte’s Black artistic community. In partnership with photographer Will Jenkins, Dammit Wesley founded the BlkMrktCLT art gallery in Camp North End; started Let’s Talk Dammit, a monthly forum for creatives; organized the Durag Festival, which celebrates Charlotte’s vibrant Black culture; and has been an active leader and contributor to the Talking Walls Mural Festival in Charlotte. His work is thoughtful and in-your-face—just what we need to spur critical conversations. 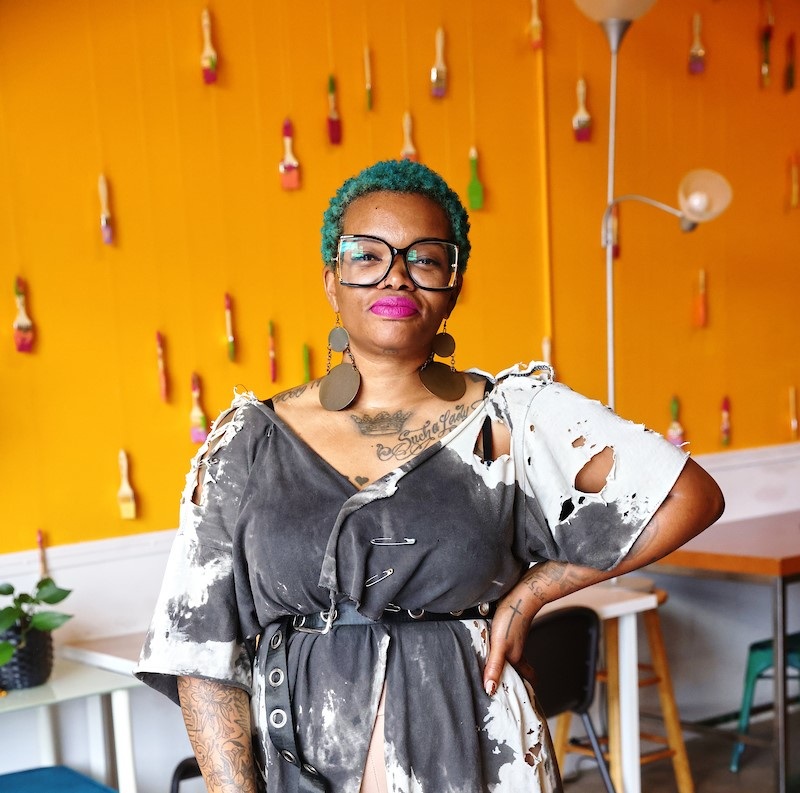 An eclectic artist, fashion designer and entrepreneur, Davita co-founded Camp North End's Dupp&Swat creative studio with her brother, Dion. The studio provides a platform for self-expression and social growth opportunities for Black innovators and makers. She also co-founded the creative agency Hue House and the nonprofit CrownKeepers. She’s been a speaker at Creative Mornings; participated in Innovate Charlotte’s Venture Mentoring Service; and spearheaded various events and forums dedicated to empowering and engaging Charlotte’s Black creatives. Seriously, what hasn’t she done?

Among Charlotte’s Black leaders, there is perhaps none more influential than Former CMS Superintendent Earnest Winston. A former journalist, he led one of the nation’s largest school districts and has been faced with multiple challenges—a role that put him at the forefront of helping students navigate hectic and unprecedented times.

This entrepreneurial husband-wife team are culinary masterminds changing the flavor of our city. Their first restaurant, The Yolk (now called Uptown Yolk and relocating to South End), has become a community staple and their modern juke joint, Leah & Louise, has been a major hit at Camp North End. Their newly formed restaurant group has plans to add numerous creative culinary concepts over the next decade. The duo helped found the popular Soul Food Sessions pop-up dinner to support people of color in the culinary arts, restaurant and hospitality industries; they founded the BayHaven Food & Wine Festival, a culinary celebration of Black foodways; and their accolades keep adding up: Leah & Louise was named Esquire’s No. 2 restaurant in the country (2020), and Chef Greg has twice been nominated for the prestigious James Beard Award.

Harvey B. Gantt was the first Black student admitted to Clemson University and went on to serve two terms as the first black mayor of Charlotte at the same time it began embracing its identity as a “New South City.” A retired architect, Gantt remains active in Charlotte’s political scene, having served on many civic, cultural and business boards. His name is a fixture in the community: the Harvey B. Gantt Center for African-American Arts + Culture is named in his honor.

An educator, facilitator and proud agitator, Janeen Bryant has consistently spoken truth to power on behalf of underserved students and marginalized communities for 20 years. She served as co-founder and director of operations for the Center for Racial Equity in Education (CREED) and founded Facilitate Movement, a consultancy that helps institutions organize and lead with cultural competency and empathy.

Jonell Logan is a distinguished arts advocate and curator who is a founding board member of OF/BY/FOR ALL, which equips civic and cultural organizations to operate “of, by or for” their community to become more equitable and inclusive. She serves as a Vice President and Creative Director for the McColl Center, helping support its mission of championing contemporary artists and sparking creative experiences for positive community impact. She’s also an adjunct professor at Winthrop University and the studio manager and curator for her artist husband Juan Logan.

Charlotte’s first Black female mayor, Vi Lyles has led the city through some turbulent times since her election in 2017. Although no stranger to controversy or criticism, Lyles’ leadership, diplomacy and compassion have been praised by even her staunchest political opponents. She recently announced that she will be running for a third term in 2022.

Charles Thomas is a social entrepreneur, educator and photographer committed to empowering the community and fostering creativity and civic innovation in Charlotte. In his role with the Knight Foundation, Thomas is leading a program focused on equitable development in Charlotte’s Historic West End. Prior to that, the Charlotte native served as the Executive Director of Queen City Forward, a former resource for entrepreneurs with business ideas that address social needs. Needless to say, his work over the last 10 years is making a major impact on the city.

Charlotte-native Dr. Shante' Williams is a force to be reckoned with when it comes to solving complex problems and making a difference. She began her career in the medical field where she discovered innovative chemotherapy treatments for invasive brain tumors but then shifted her focus multiple times to contribute her innovative problem-solving skills to other industries as well. She is now an angel investor and venture capitalist breaking barriers with the Black Pearl fund by focusing on investments that reduce health disparities across the globe. She also serves as the Chair of the Board of Directors for the Charlotte Mecklenburg Black Chamber of Commerce, where she leads efforts to provide resources and support for Black-owned businesses in the community.

For 20 years, Krista Terrell has been committed to the health and prosperity of arts and culture in Charlotte. The Johnson C. Smith University graduate stepped into the role of President in 2021 after serving as Vice President of Marketing and Communications for more than a decade. Her appointment came at the same time the City of Charlotte redirected funding for the arts. Although she has been faced with a change in the organization’s historical funding model, she is a major force in leading the team’s commitment to the Charlotte community, cultural equity in the arts and securing other funds to support local artists of all backgrounds.

In spring 2021, Marcellus “MT” Turner became Charlotte Mecklenburg Library’s top leader after spending nearly a decade with the Seattle Public Library system. He will play a major role in working toward the goals in the Library’s Blueprint 2025 Vision Plan, the completion of the new Main Library set to open in Uptown in 2024 and the library’s diversity and equity efforts. He’s positioned to make some big waves in Charlotte and already has by removing library fines and shifting focus to digital and mobile opportunities.

During the height of the pandemic in summer 2020, four friends from diverse professional backgrounds (but all from Charlotte) came together to help Black-owned businesses survive, stabilize and thrive, and they’ve been doing so ever since. CLT Black Owned created a digital platform that connects consumers with minority businesses to ensure that supporting Black-owned businesses in Charlotte is a movement, not just a moment.

Updates and additions made by Kristen Moore in January 2022.

Jonathan McFadden is a senior content designer and writer for a global e-commerce company, providing content to help businesses start, run and grow. Prior to his current role, he also wrote content for Red Ventures, Movement Mortgage and LendingTree, the latter of which he also helped start the organization’s first Diversity and Inclusion Group. A former newspaper reporter covering small business, entrepreneurship and government news, he now also manages his own brand storytelling and content writing business, Jon Writes. When he’s not serving at church or working on the Sci-Fi novel he hopes to publish, he enjoys spending time with his wife, reading comic books, binging good anime and sitting in his recliner. 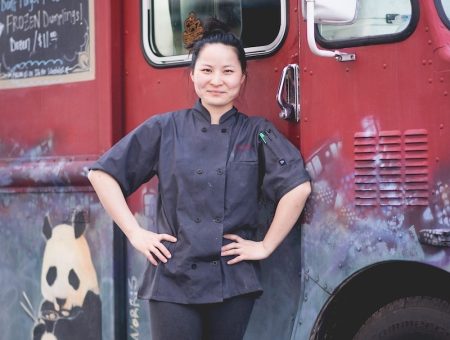 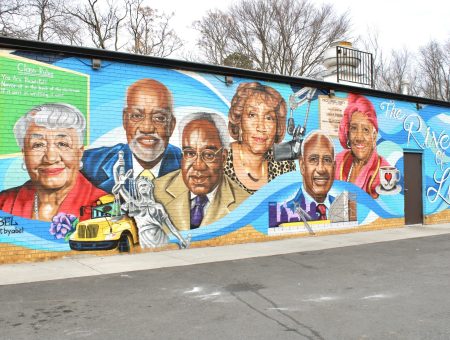