Charlotte is booming with craft breweries, with new spots steadily on the horizon. Don’t know where to start when sipping your way across the Queen City? From pilsners and blondes to stouts and IPAs, these 20 must-try beers are perfect for any beer lover’s bucket list. 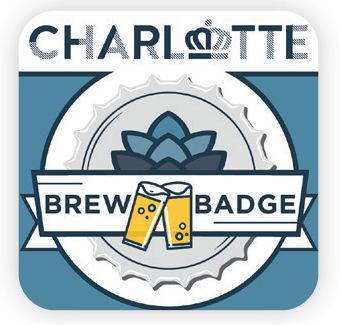 Looking to check some of these local brews off your list? Grab a Brew Badge to an easy way to save time and money while supporting local.

Follow the NoDa Craft Beer Trail and make your way from one hotspot to another. 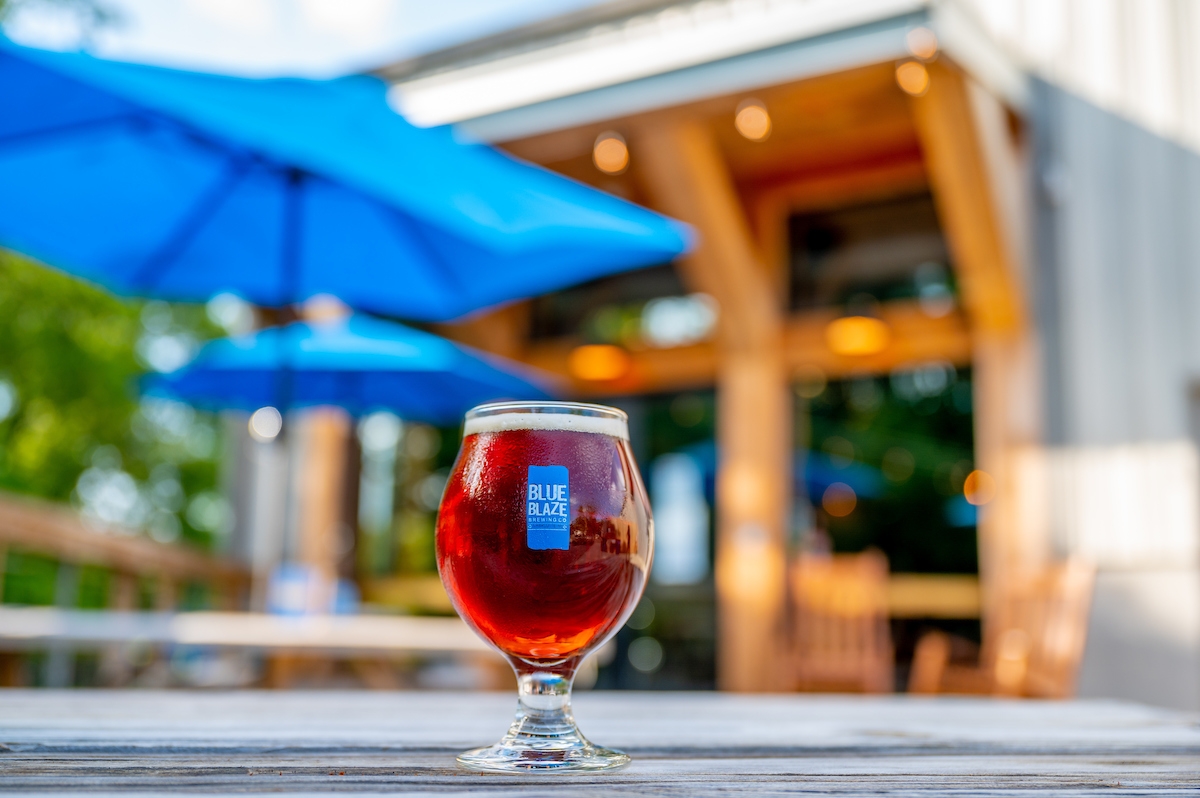 With 5% ABV, Yellow Blazer Kölsch is both mild and sweet as malts balance nicely with a subdued spicy flavor from German hops.

Universal Language, Divine Barrel’s flagship West Coast IPA, is hopped with Citra, Simcoe and Mosaic hops. With an ABV of 6.5%, this beer illustrates both the juicy and bitter nature of the hops, finding the perfect balance of these distinctive flavor profiles. 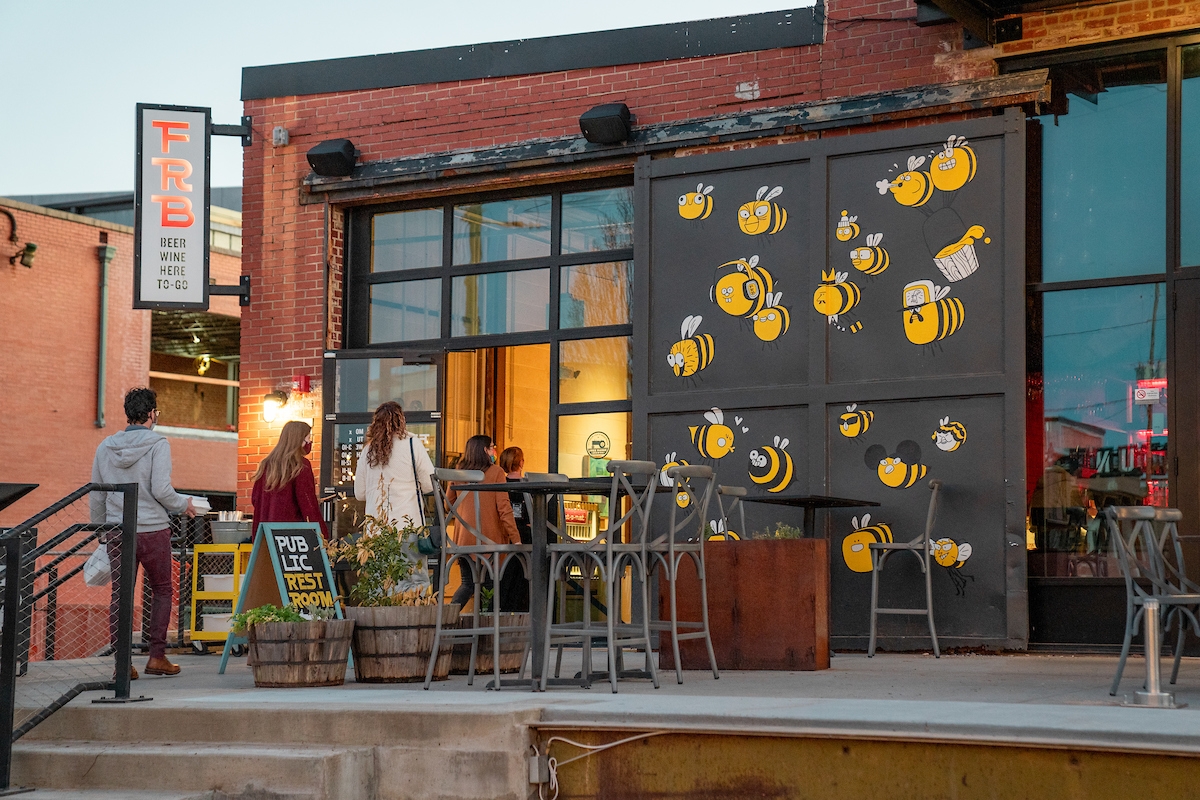 Champion of Charlotte Magazine’s 2022 Summer Sips Beer Bracket, this bright Hazy IPA refreshes with tropical and citrus flavors and 5.3% ABV. With a goal of “bringing local closer to home,” Free Range Brewing emphasizes local ingredients and is a must for all locavores. 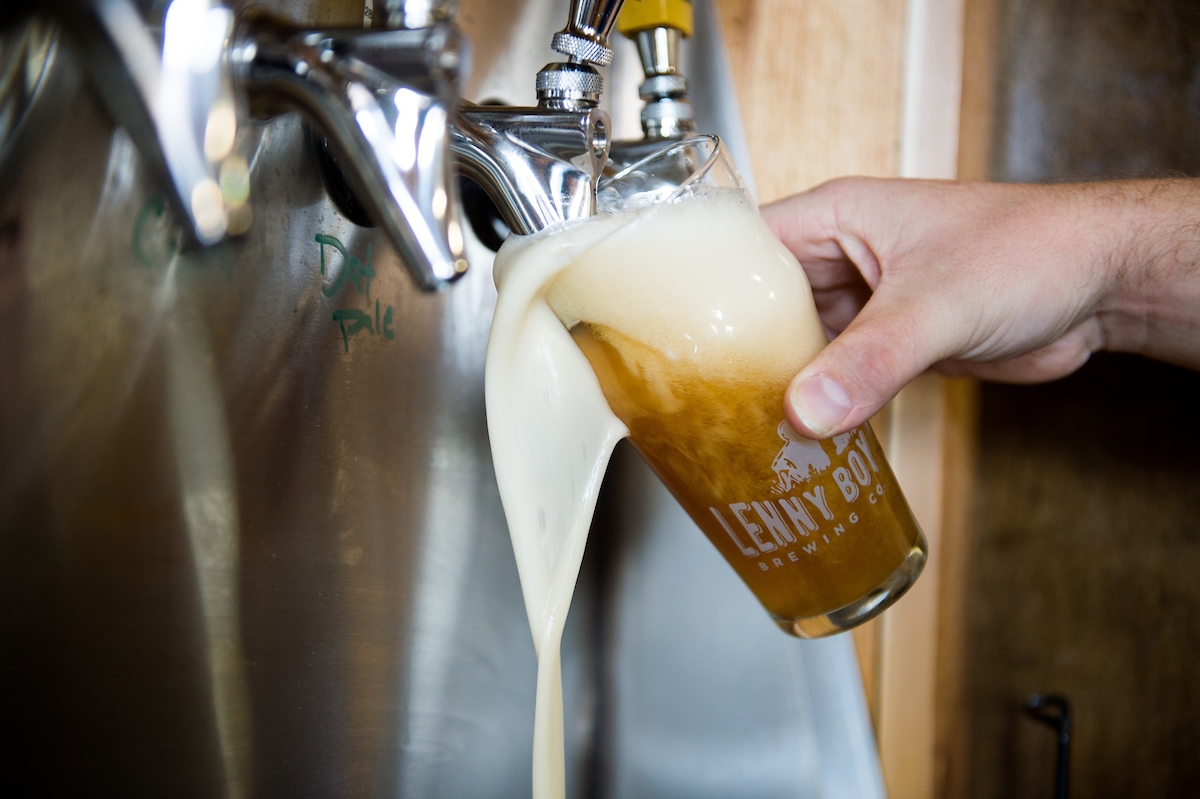 With an ABV of 6.4%, this American IPA is made with majority Citra hops, blended with Amarillo and Ekuanot hops. It boasts a signature citrus flavor and aroma that earns high marks with craft beer lovers near and far. 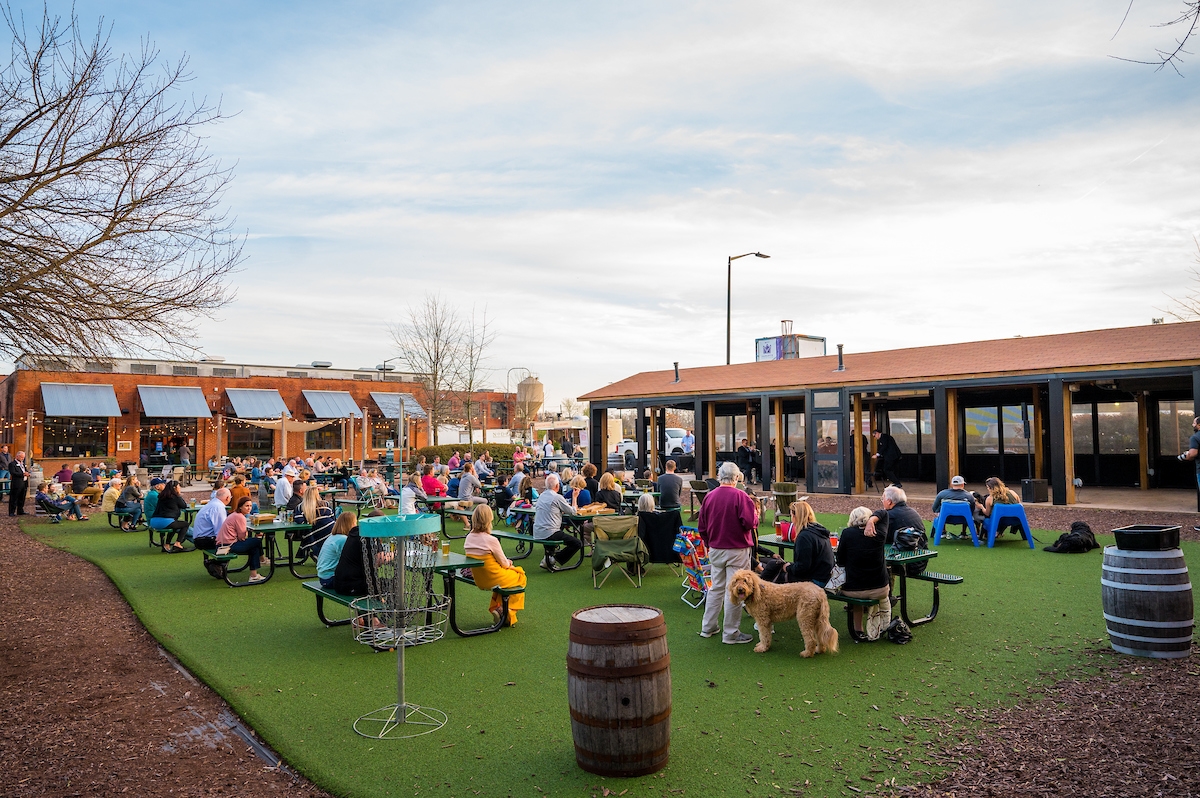 This local-favorite IPA is packed with intense hop flavor and is made with five different varieties of hops, including Chinook, Warrior and Centennial, and a blend of multiple malts. One sip will make it clear why Hop, Drop ‘n Roll was a gold medal winner at the 2021 U.S. Open Beer Championship and 2014 Great American Beer Festival.

Hazy Skies is a pale, refreshing German wheat ale brewed with three different types of wheat malt. A Bronze Medal Winner in both the 2021 Great American Beer Festival and the 2020 U.S. Open Beer Championship, this beer has a fluffy mouthfeel, banana-clove character and dry finish.

This rich, dark and smooth brew is a double Imperial stout brewed for Traust’s brewer to use as a wedding toast. It has an almost-decadent big-bodied flavor and is a great addition to Mount Holly’s budding beer scene. 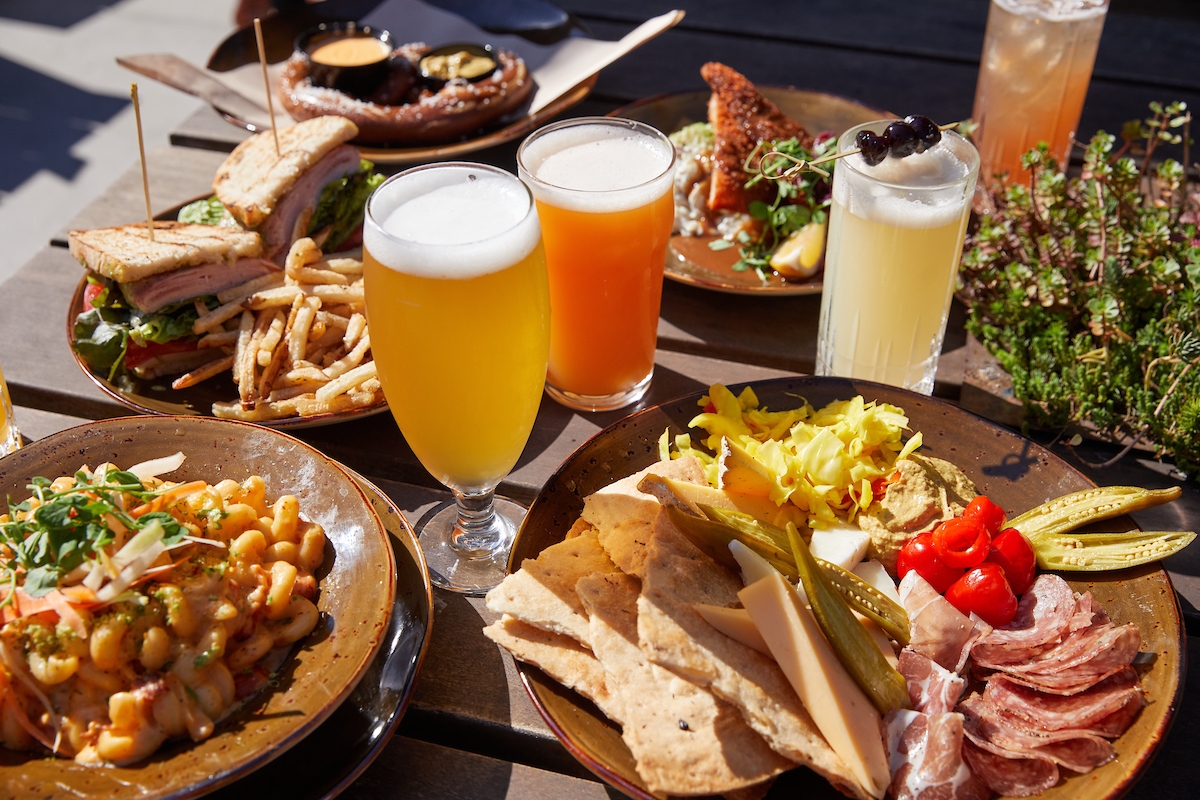 To feature the flavors of pulpy orange juice and tropical fruit, this 7% ABV 2020 U.S. Beer Open winner is double dry hopped with Citra, Lemondrop, and Motueka hops and is a refreshing brew to be enjoyed in the lush taproom or on the light-rail-trail-adjacent patio. 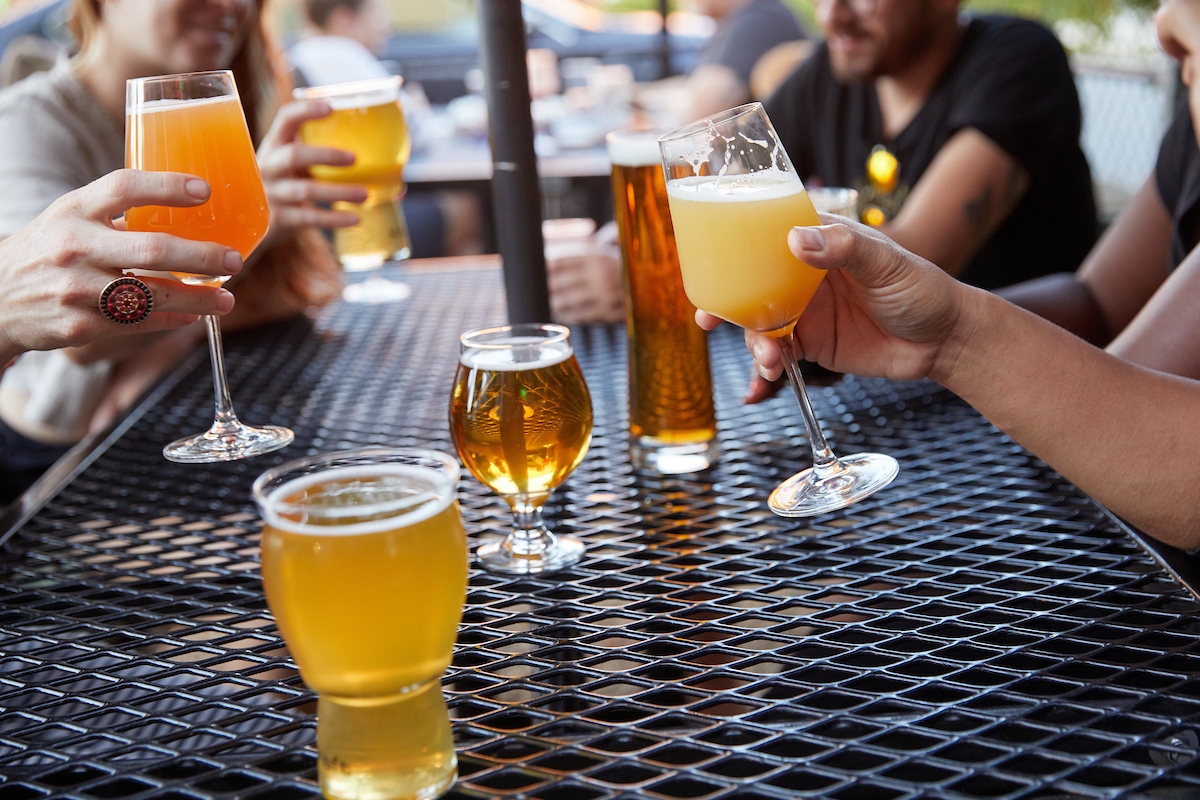 Brewed in traditional Belgian style, this Dubbel boasts complex flavors of plum, raisin, clove, cherry, brown sugar and caramel, with a warm boozy finish. As one of only 19 Master Cicerones in the world, Sugar Creek co-founder Joe Vogelbacher has helped create a 7.6% ABV brew that is winning awards and pushing boundaries. It most recently won Silver at the 2021 U.S. Open Beer Championship and gold in the U.S. Open Beer Championship, Best-of Craft Beer Awards and Beer Army Wars in 2018. 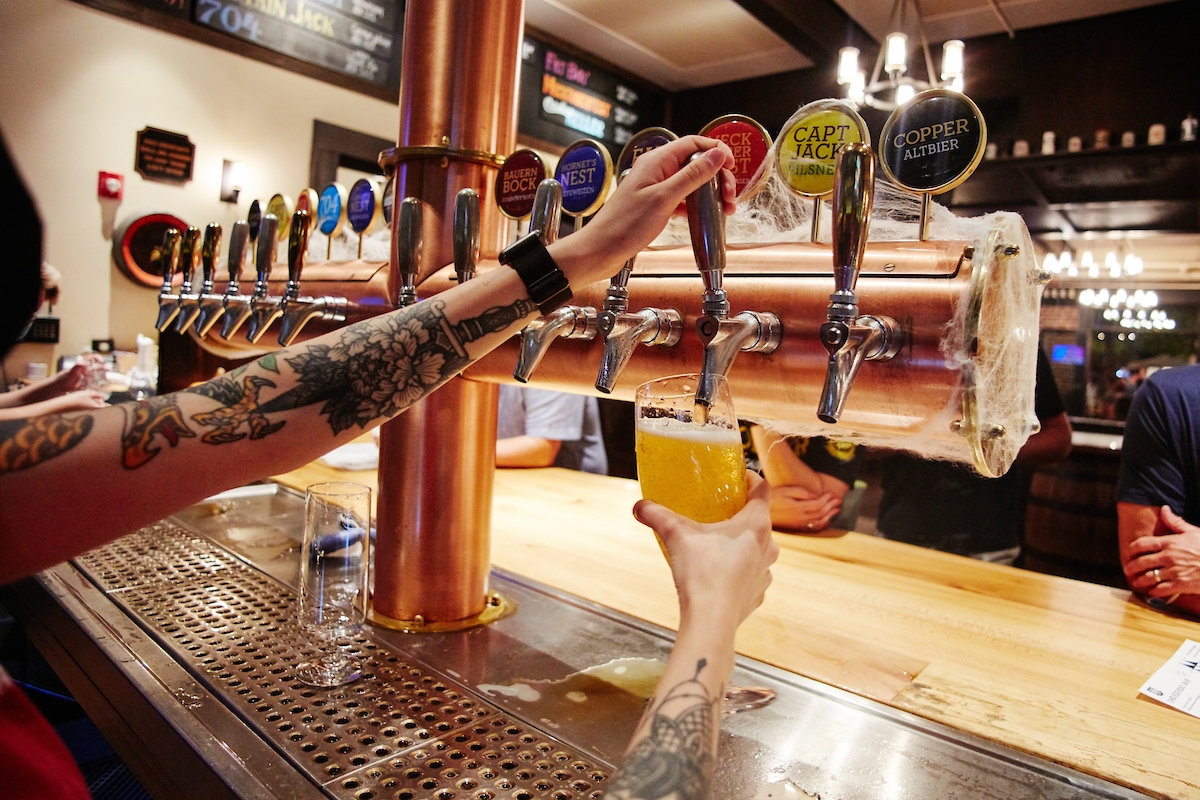 Where to Order: The Olde Mecklenburg Brewery
Neighborhood: LoSo

OMB’s Copper is the brewery’s flagship and a Charlotte staple. The German amber ale is brewed only with the sacred four ingredients of water, malt, hops and yeast, then stored at cold temperatures for several weeks. The result is a refreshing ale/lager hybrid that is clean and refreshing, with hints of graham cracker, toffee and caramel. 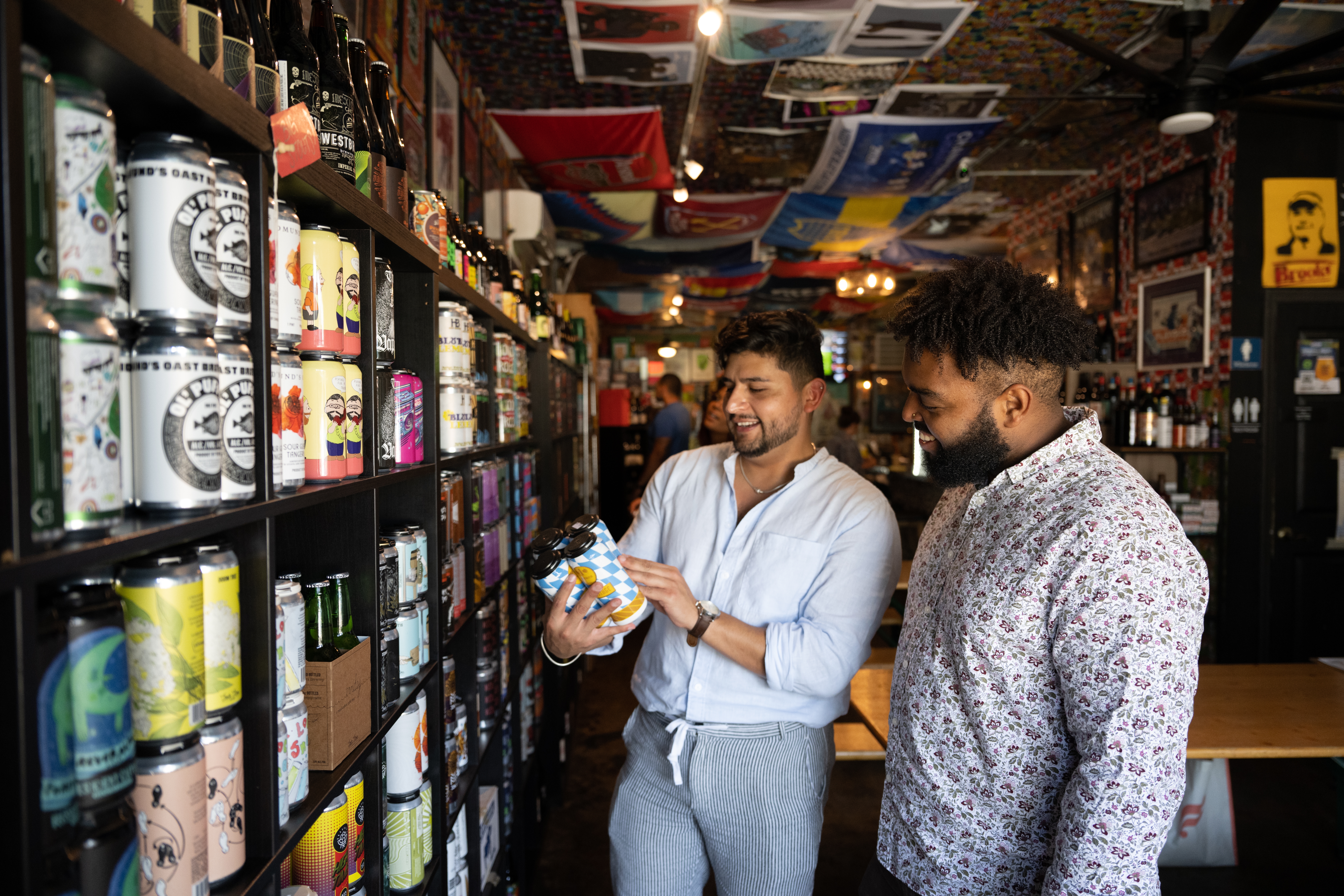 Del Patio is a light and refreshing Mexican style lager made with flaked corn and is an easy drink pairing perfectly with a pizza from Salud’s wood-fired oven.

Glow is a light-bodied golden ale with peach and tropical fruit undertones and tasting notes of honeysuckle and melon. It's a refreshing ale from Midnight Mulligan, a recent addition to the craft brewing scene. 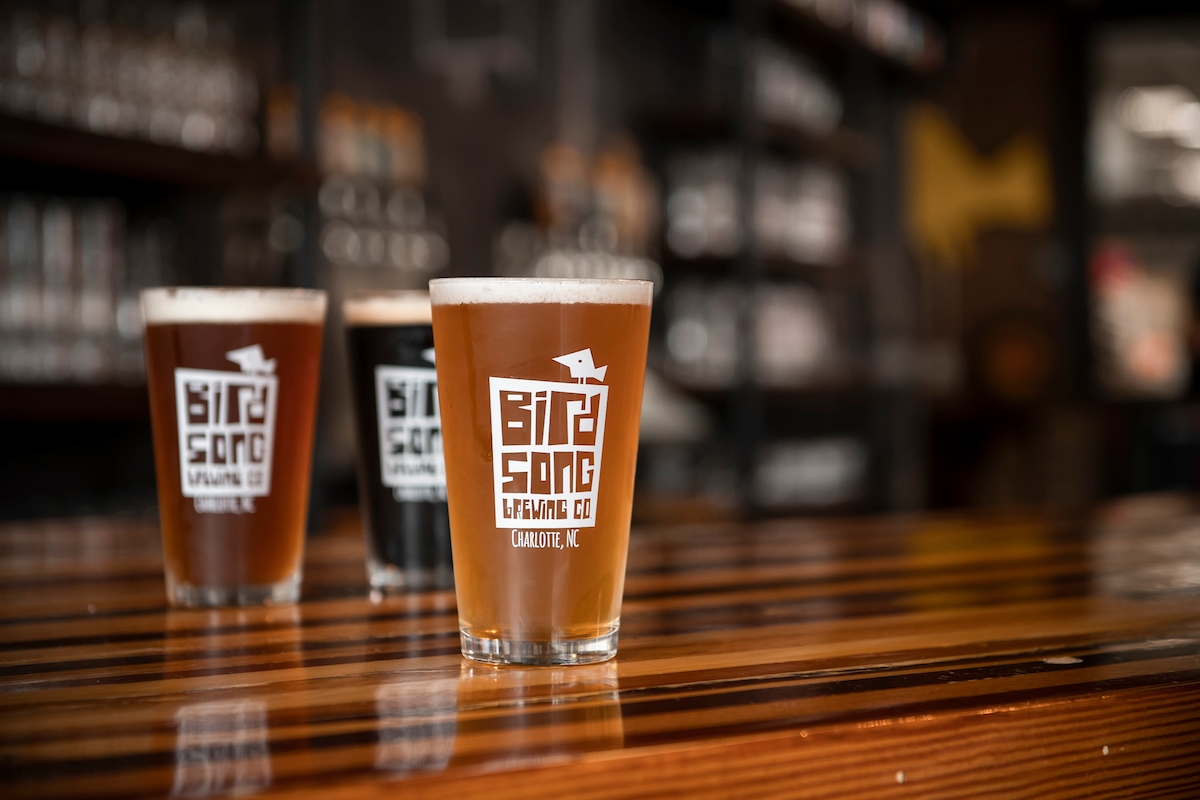 Fresh jalapeño peppers are hand-chopped and added to Birdsong’s Free Will Pale Ale, creating a spiced beer with a crisp flavor. By removing the seeds, the flavor and aroma of the jalapeño peppers are preserved without adding heat to the herbed brew. It’s been a perennial favorite since it was first introduced by the NoDa-area brewery in 2011 and received an Honorable Mention at the 2021 North Carolina Brewers Cup. 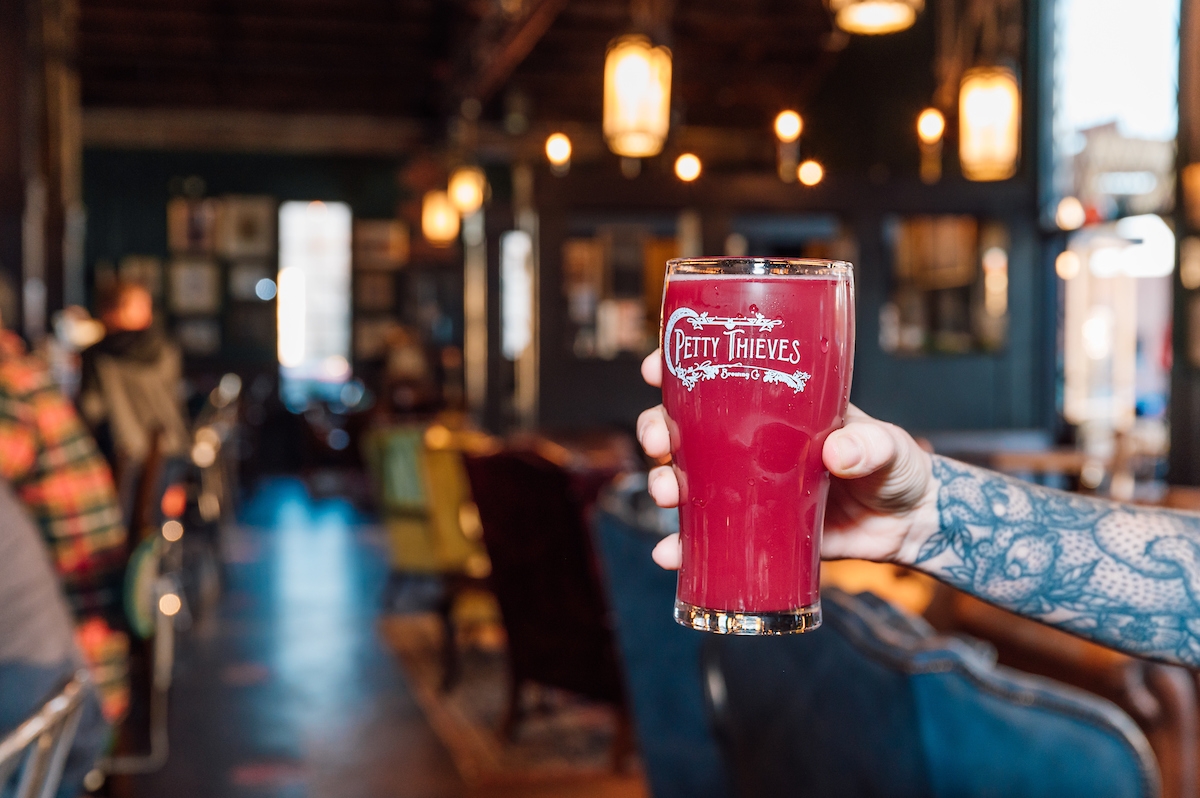 Joyride is a fruited sour that should be savored by Charlotte natives, transplants and visitors alike. Cheerwine, the cherry-flavored soda faring from Salisbury, is used in this red brew, along with cherry puree and dairy-free vanilla soft serve powder to masterfully mimic an ice cream float.

Juicy Jay can be found at any of Legion’s four locations, on tap at bars and restaurants around the city and is one of the highest-selling beers in Charlotte grocery stores. It’s a juicy, citrusy, tropical treat with a distinct, dry finish. Hop flavors and aroma come from Mosaic, El Dorado, and Cascade hops. Legion’s flagship IPA, Juicy Jay won a BOB Award for Best IPA and Charlotte Magazine’s 2020 Beer Bracket. 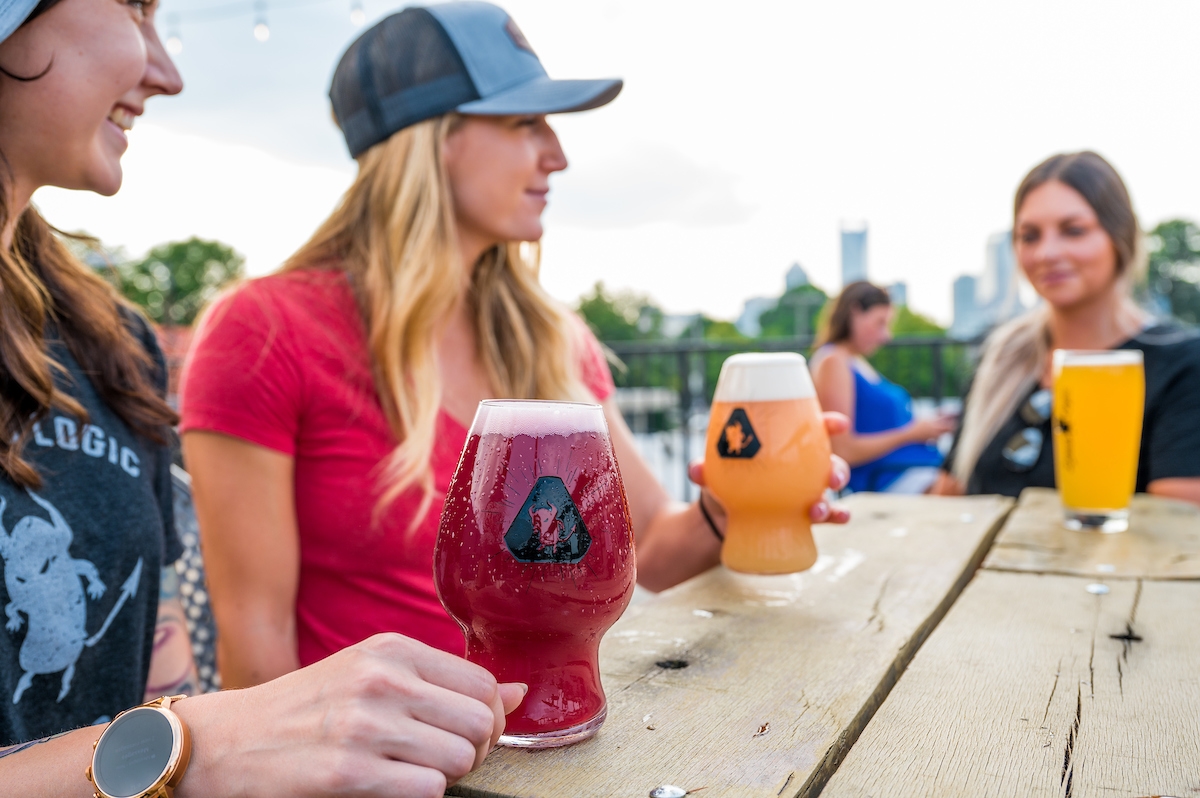 This 2022 World Beer Cup silver medal winner has balanced flavor and fruity aroma, and, at a sessionable 4.7%, is a picture-perfect choice for enjoying on the brewery’s rooftop patio with a skyline view. 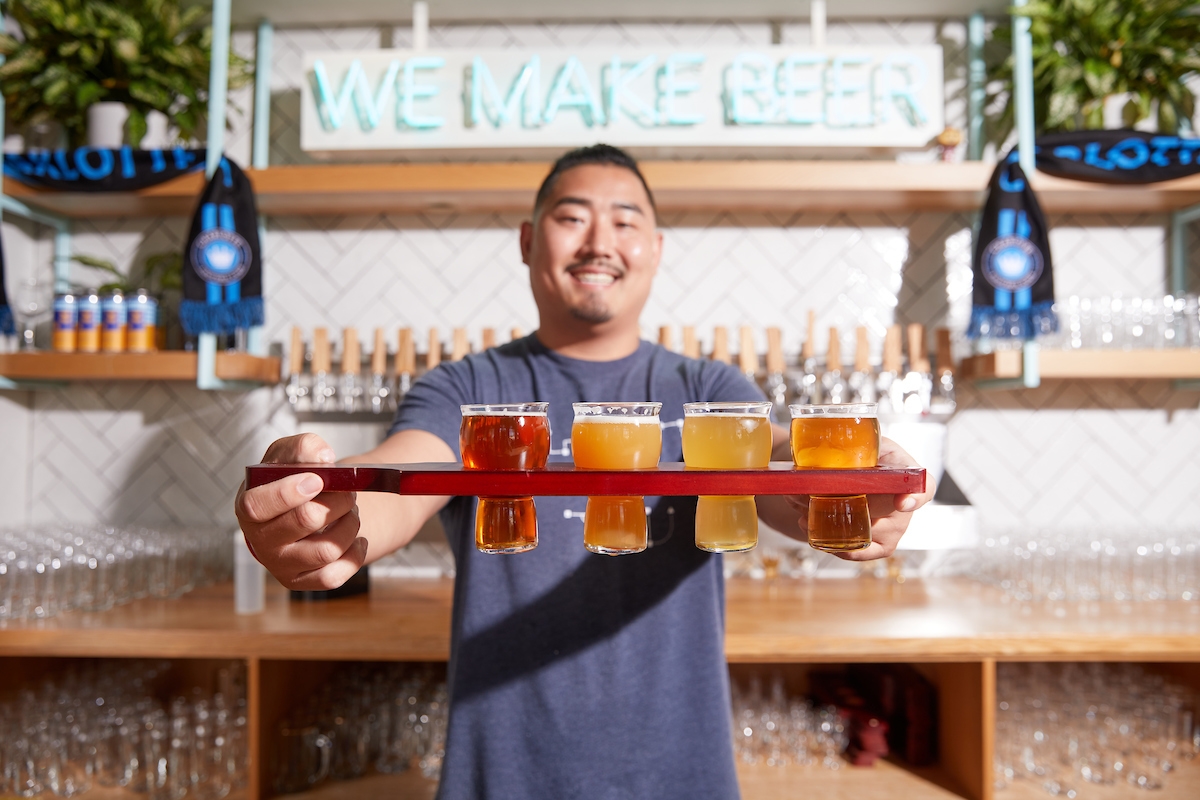 Queen Charlotte is a traditional Pilsner malt base hopped in the kettle with Zuper Saazer and Montueka, giving it hints of lemon and lime, honey, biscuit and a mild spiciness. A Gold Medal Winner in the 2021 North Carolina Brewers Cup, Queen Charlotte is moderately bitter with a light body with a slightly creamy finish. 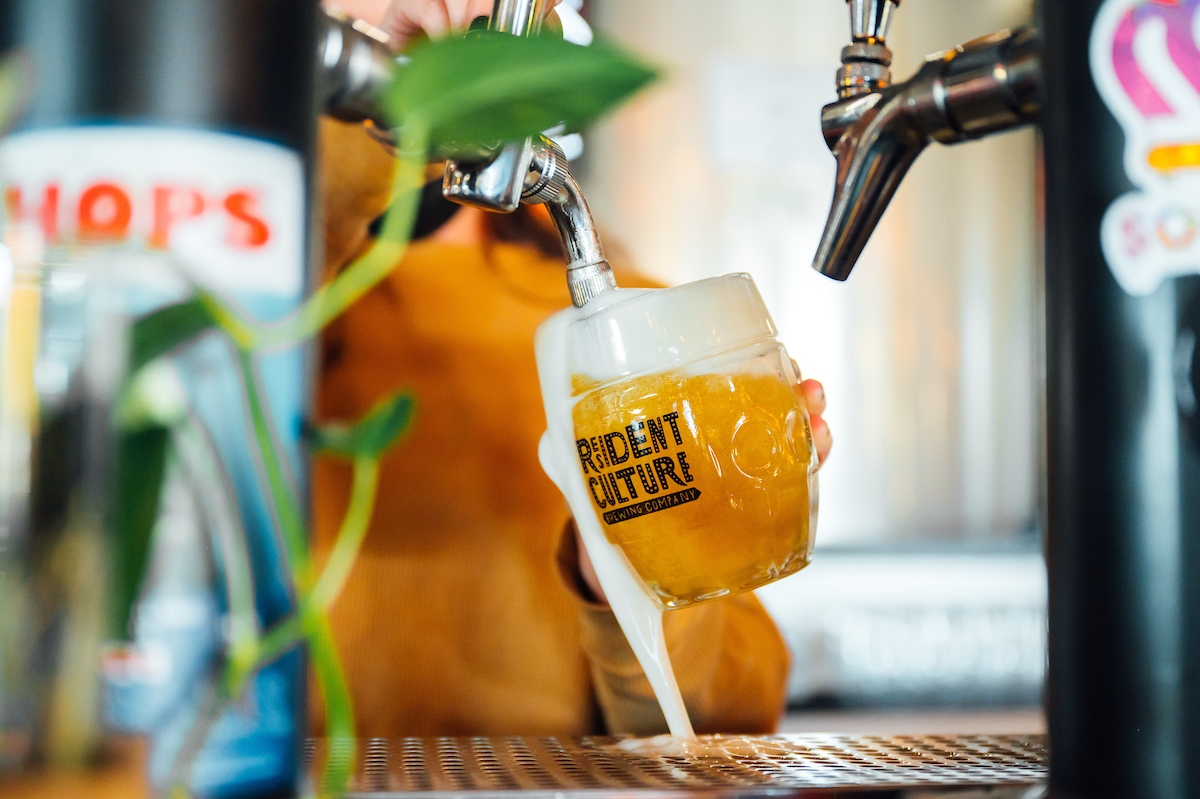 Resident Culture is known for its assertive, hop-forward brews and its flagship New England hazy IPA doesn’t disappoint. Hopped with Citra, Mosaic and Galaxy, Lightning Drops is heavy and fruity and comes in at 6.5%. 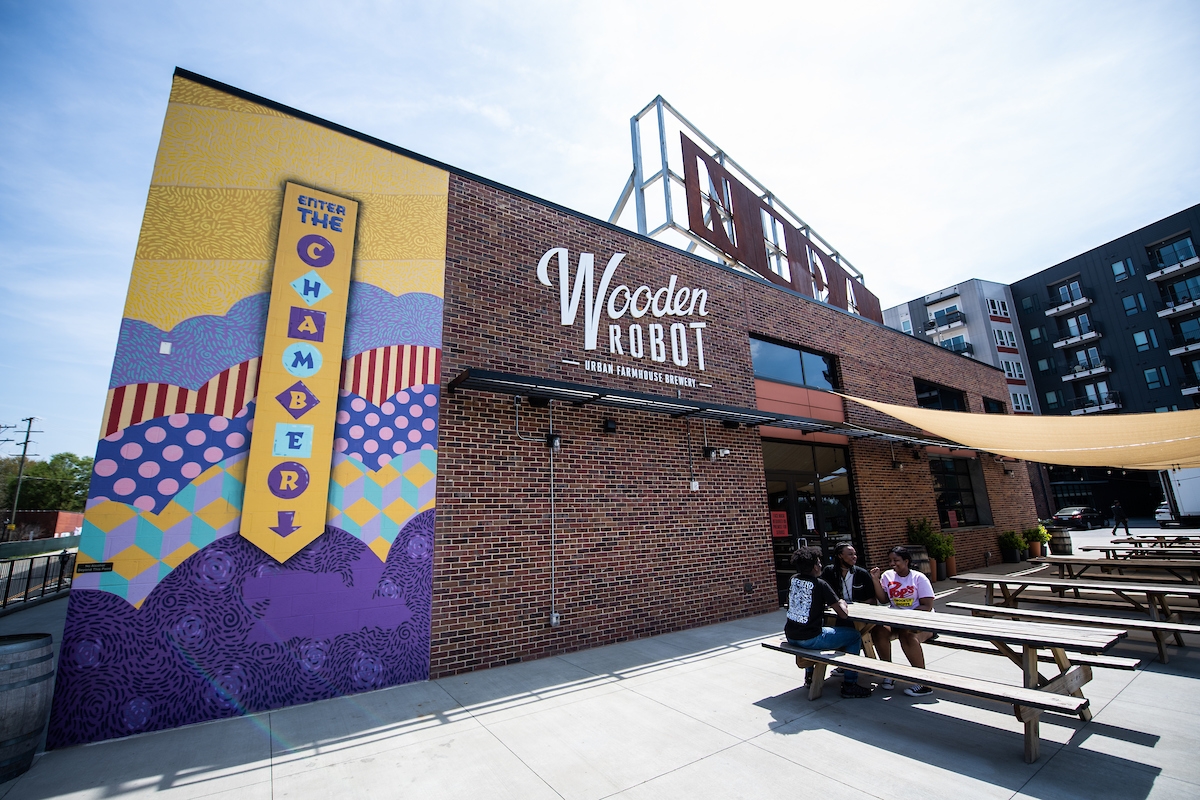 The Chamber at Wooden Robot - Photography by Jamey Price

A relatively under-represented style, Good Morning Vietnam is a coffee blonde ale and is brewed with locally-roasted Ethiopian Coffee from Enderly Coffee Roasters and Madagascar vanilla beans. The result is a light and malty beer that is complex yet approachable. 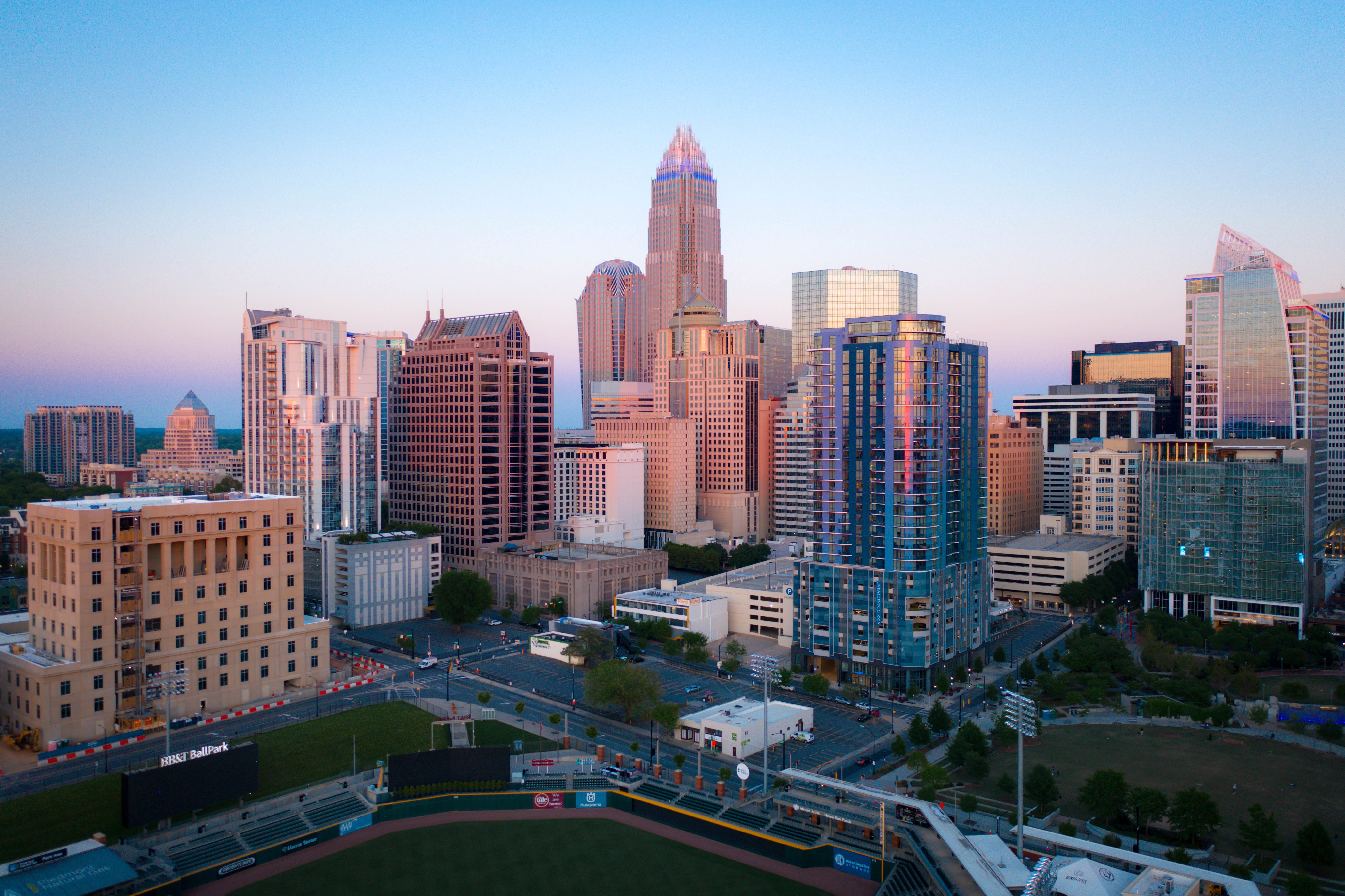 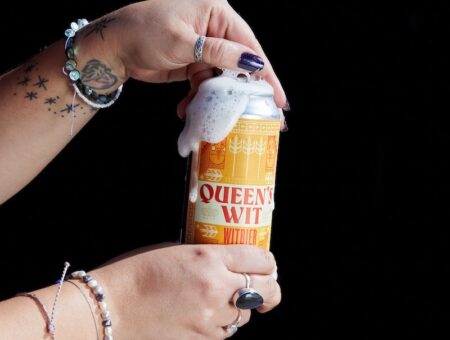 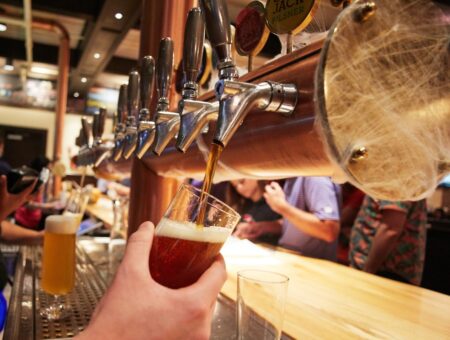 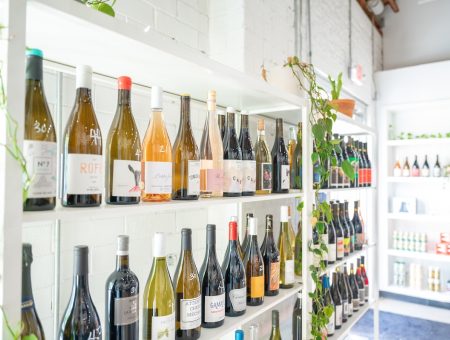 Eat & Drink
Where to Drink Wine in Charlotte 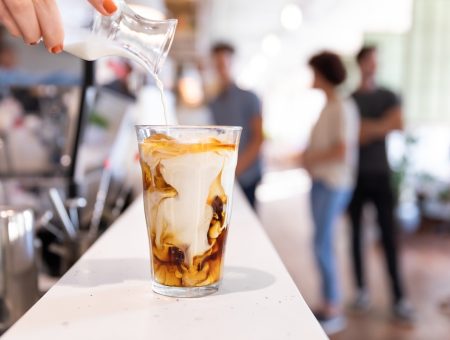 Eat & Drink
15 Ways to Enjoy the Best of Charlotte Coffee